My sole contribution to the Taiwanese The Sand Pebbles filming locations hunt was this bit of rural spotting based on what turned out to be a single rice paddy terrace wall.

This location was used briefly in the film as the sailors make their way to the missionaries (including Candice Bergen) who have made their base in an old temple building out in the middle of nowhere. The top image is the first time we see this place as they make their way through the rice paddies to what looks like a distant temple.

In reality, the hill that the temple is on in that shot is only a few hundred metres away and, of course, the building is superimposed. This location is a place called Zhuzihu and is situated in a valley slap bang in the middle of the Yangmingshan Country Park. It took a while for me to find, but I did have the benefit of knowing that filming was done 'somewhere' in Yangmingshan. In the end it was the very distinct rice terracing that finally revealed the exact location and I was able to head out there a couple of weeks ago and get some modern day comparison snaps. 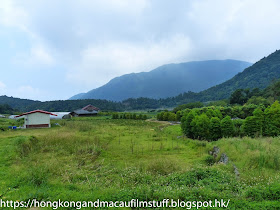 It's a bit difficult to see on my picture but the rice paddy sides are still evident even after all these years (it's much easier to see on Google Streetview which was obviously captured some time ago) so I have taken the liberty of using my blunt crayons and marking them below to make it clearer. 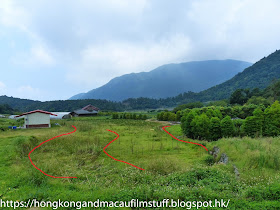 Incidentally, the hill where the temple is supposed to be is actually right next to the bus stop (I caught the S9 minibus from outside Beitou station and rode it all the way to the last stop at Fungjiakou). It takes about 10 minutes following a pathway around the paddies to get to this spot.

Anyway, later on the same scene we see the sailors walking up a set of steps to what is supposed to be the front door of the temple. This is the image below. However, if you look closely you can see the same distinctive rice paddies behind the actors, so it's obvious that this shot was made from slightly higher up than the first one.

I did go up the hill (there is a nicely landscaped path - the Bailaka Highway Pedestrian Trail - that leads you up to the road) and looked for a reasonable match to the angle on the hills and found one on a stone bridge that runs over a stream. You can see my picture taken from that location below. 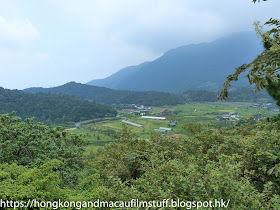 The vegetation is now too overgrown to see back down to the paddy fields but I think the angles on the mountain opposite (it's called Datunshan 大屯山) are about as close as you can get. So, I believe the steps (obviously a prop) were constructed using the bridge top as an anchor. Of course the real temple set was in fact constructed over in Malibu Creek State Park (at this exact location near Las Virgenes Creek).
Phil at 16:26
Share