The Tamsui part of the movie took up about 3 months worth of filming. It's the location featured the most because it is a stand in for Changsha, where much of the story unfolds. It's also the location where the "death by a thousand cuts" scene was filmed.

The main focus of this area was waterfront in town and there are a couple of landmarks that are on screen that can still be found today.

When I first saw this film and wasn't paying much attention, I had always thought that the red brick building on the hilltop was the famous former British Consulate Building. It's one of Tamsui's stand out structures and well worth a visit. However, on closer inspection the architecture is not quite right and we would expect to see the Fort San Domingo immediately next to it. After some investigation  it turned out to be a building known as the "Red Castle". The Red castle was built in 1899 and is still intact, functioning as a terraced restaurant called the "Red House Cafe Restaurant". Sadly, I only discovered this after the fact so neglected to visit it while I was there. One to save for my next trip.

Look closely at the images above and you can also see a small church with steeple in the background on the left. This is the Tamsui Presbyterian Church and is also still around. The combination of these two landmarks gives us a fairly good indicator of whereabouts on the waterfront the main action took place. Which leads us to the final building in the foreground. This was supposed to be Changsha customs building )I think?). I have no idea what it was originally but will say it hasn't survived (despite many other similar structures in Tamsui being saved and re purposed). Unfortunately, the building that replaced it is a bit of an eyesore because it contains...a Starbucks.

The colonnaded building at the waterfront has been replaced by this... 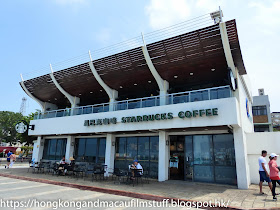 The other scene I mentioned was the death scene of the engine coolie, Po Han (played by the Oscar nominated Mako Iwamatsu who I first encountered as the cane wielding master in Jackie Chan's Battlecreek Brawl many moons ago). It's definitely one of the key scenes of the movie (albeit a gruesome one) and at a guess - judging by the angle on Guan Yin Mountain on the other side of the river - it was probably filmed a little bit further north somewhere near to where Section 1, Zhongzheng Road intersects with Lane 8 Zhongzheng Road i.e. about a kilometre to the north. Sadly, development means the exact location is impossible to pinpoint.

I didn't wander as far up as that, but here is a picture of Guan Yin Mountain from about halfway between the main filming location and Mako's death scene. 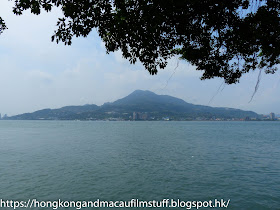