O'Neal goes off on a bit of a downer and goes for a wander around the garden at Signal Hill (Blackhead Point). You don't see it in the film but this is where the signal tower still stands and is actually a great little escape in the middle of busy Tsim Sha Tsui. I recommend a walk up if you get the chance. The concrete structure the old fella is practising his Taichi on in the top picture is the old gun battery - although these days it's fenced off. 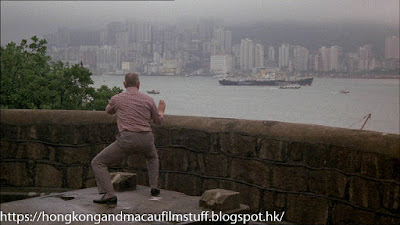 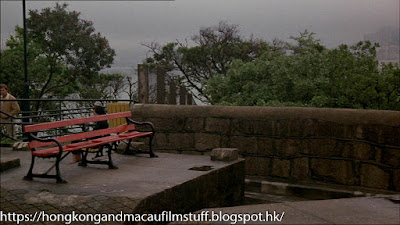 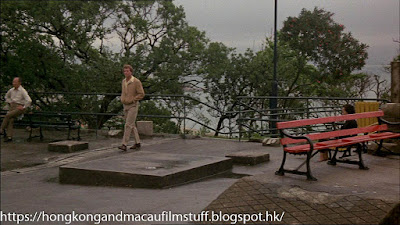 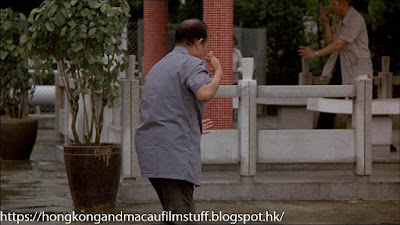 Posted by Phil at 14:16 No comments: Links to this post

The photoshoot that Bergen's character is running takes place on the front garden of the old Repulse Bay Hotel. I think the garden wall is the only original part of the hotel left. 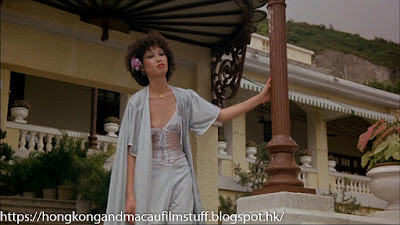 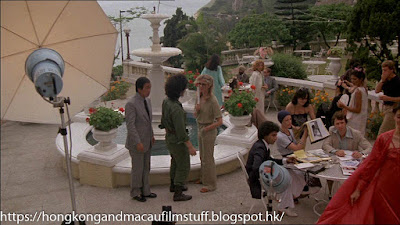 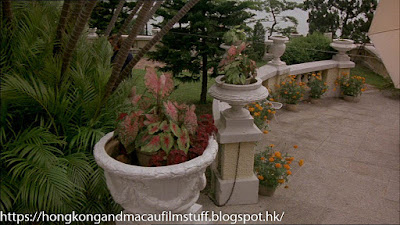 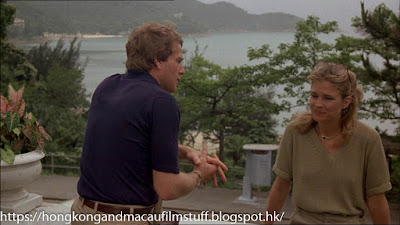 Posted by Phil at 09:33 No comments: Links to this post

You may recall that when I was looking at locations for the Spiderman film a couple of years ago I noted that the Jumbo was docked at the quayside in Aberdeen. Well, it was made the same year as Oliver's Story and we can see that the restaurant was indeed docked at the waterfront in this film too. I'm not surprised considering the number of restaurants that appear to be in the harbour. If you look at the top picture you can see the Tai pak, and two more to its right (perhaps the Yue Lei Tai and another?). From the other grabs we can also see the Sea palace was there as well. So maybe the Jumbo was at the quayside simply due to lack of space? 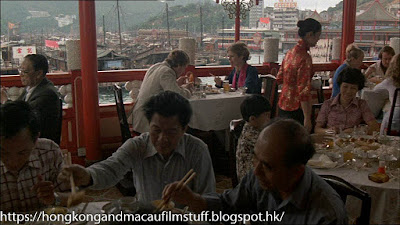 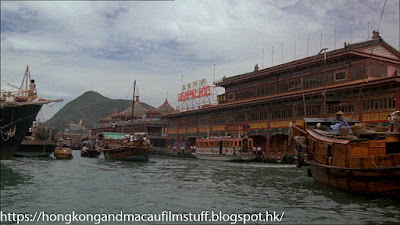 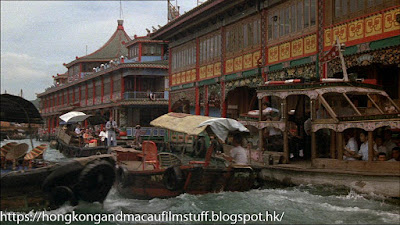 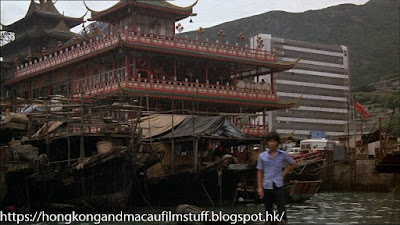 Posted by Phil at 14:58 No comments: Links to this post

A quick romantic moment is had by the pair at the waterside next to the Tin Hau Temple. This looks as though it was before all the other structures were added to the site (the pavilion, longevity bridge etc). 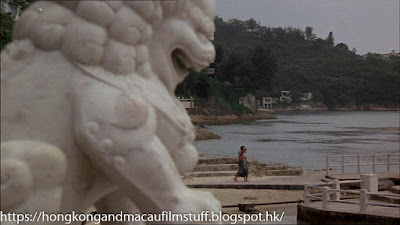 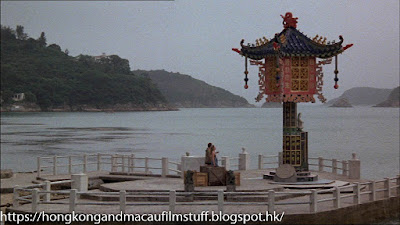 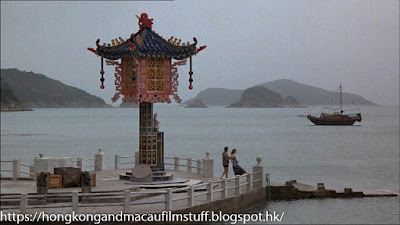 Posted by Phil at 10:43 No comments: Links to this post

The pair are staying at the famous Peninsula Hotel. As they enter, Bergen's character rmarks that they are staying in the Marco Polo Suite and it certainly looks as though the interior shots were filmed there. You can see the arched window in the lower screen grabs. 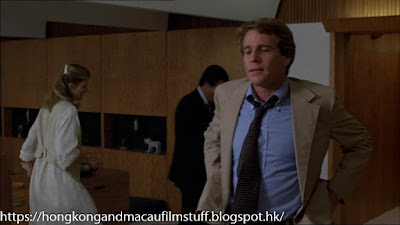 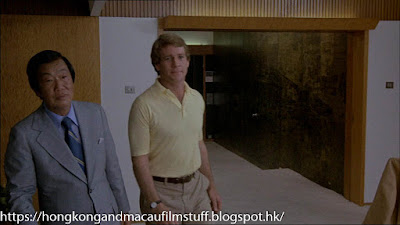 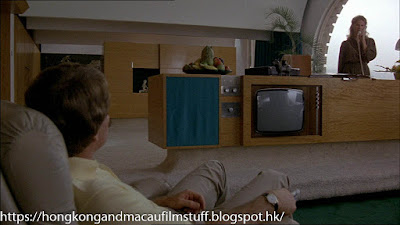 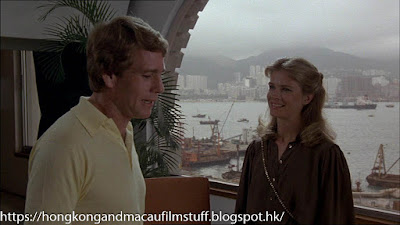 Although the decor has been updated, the layout is still very similar when you look at the floorplan that is on the hotel website. I can't seem to spot any information about which side of the hotel the suite is on though (east/west) so if anyone can enlighten me it would be appreciated.
Posted by Phil at 12:03 No comments: Links to this post

Some more nostalgia for Kai Tak lovers as the pair arrive at the airport terminal. 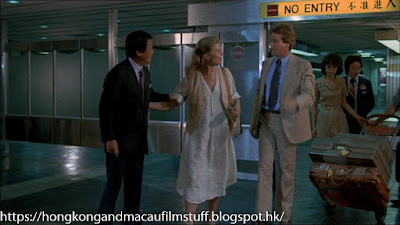 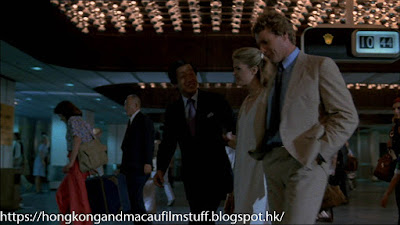 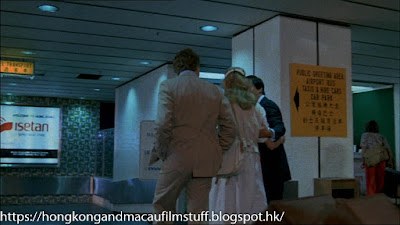 Posted by Phil at 10:00 No comments: Links to this post

It's time for a new movie I think and Oliver's Story arrived in the post the other day. This one was filmed in 1978 and stars Ryan O'Neal in a sequel to the earlier Love Story (which co-starred Ali MacGraw). In this follow-up, his wife (MacGraw) has already died of leukemia and he basically spends most of the film moping around and feeling sorry for himself. The film is mainly set in New York but towards the end he and his new rich girlfriend (Candice Bergen) head to Hong Kong so she can check out her garment factories and supervise a fashion shoot.

Cue a rather interesting angle of their plane coming into land at Kai Tak from the harbour end (as opposed to the white knuckle ride from the other direction we usually see). Check out the vehicular ferry at the bottom of the screen as well - possibly heading towards the ferry pier in Kwun Tong 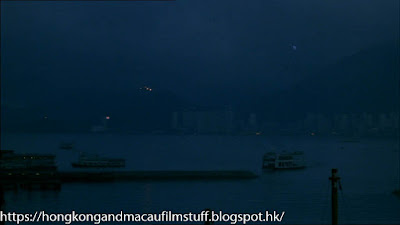 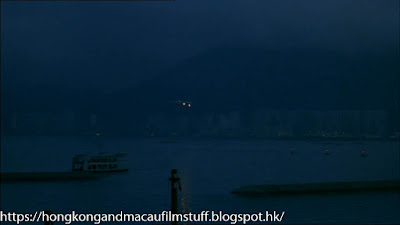 Posted by Phil at 09:28 No comments: Links to this post

I haven't looked at Noble House for a while but was recently contacted by a friendly chap, called Sean, who was living in Hong Kong at the time of filming. I can't post a link to the video he showed me but it was some home movie footage he took of the collapsed building set from the final episode. 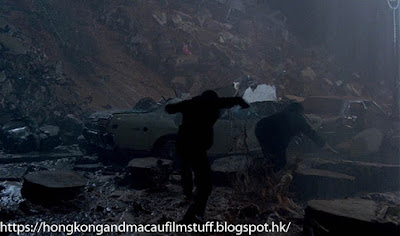 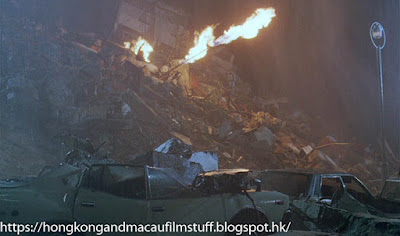 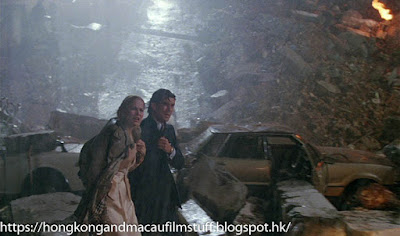 Anyway, it turns out that the set was in fact a real slope up in the Midlevels.The film makers took advantage of the recently demolished Queen's Garden building at 9 Old Peak Road and used the slope behind the empty plot to stage the disaster scenes.

Before you get too excited, the slope no longer exists. Just after filming finished work began on construction of not just the new Queen's Garden but also another development behind it called Dynasty Court. The slope was removed and a podium was constructed on which Dynasty Court now stands. The driveway of Queen's garden covers the area where the cars are in the above screengrabs.

Anyway, a big thanks to Sean for letting me watch his excellent home movies and helping identify a location which I had never really considered possible to find. You can click on the location link below to see the exact spot.
Posted by Phil at 13:19 No comments: Links to this post

A quick look back at episode 7 - Rummy's Cut - has revealed another location I missed out the first time. I have no idea why because its location is quite obvious as being the pedestrian bridge that spans Canton Road between the Silvercord Centre and what is now the Marco Polo Gateway Hotel. Also, it appears directly before this location which (almost) makes sense. Anyway, here it is. Not much has changed in the intervening time. 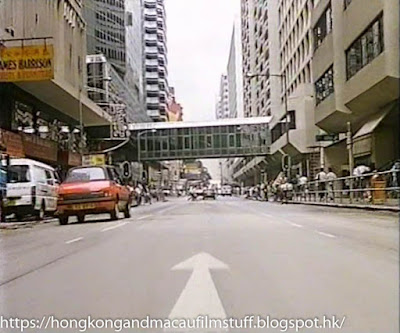 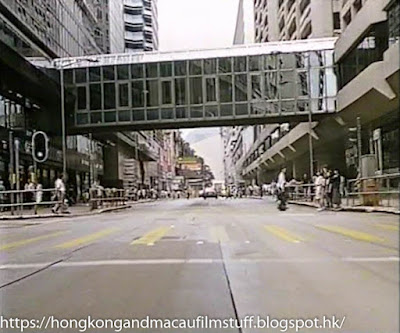 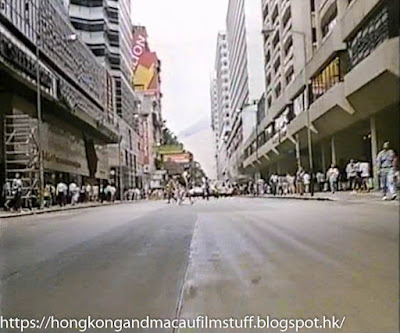 Posted by Phil at 13:00 No comments: Links to this post