The first murder is supposedly committed in an office block situated along Duddell St in Central. The building on screen below (on the right) is called the Printing House but I can't make out if that is the one they go into or the one further up the street (behind camera) which is the HK Diamond Exchange. The presence of Ruttonjee House in view on the left makes me think the latter.

I guess Duddell Street is more famous for the original gas street lights and the steps at the end of the street than it is for the buildings along there. 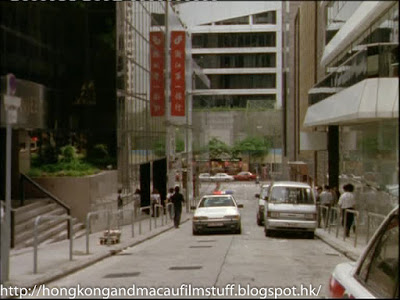 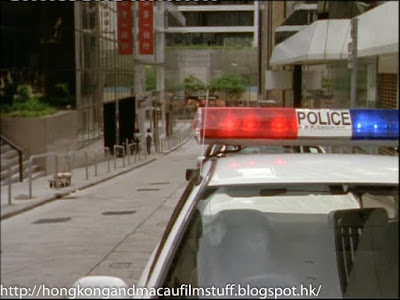 Posted by Phil at 14:03 No comments: Links to this post

Philby's long-suffering girlfriend lives above a shop in Kowloon City and we get a nice birds-eye view of the area as a plane flies overhead towards the landing strip at the old airport. The road we are focused on is Lion Rock Road and although we initially see it from the north the following closeups - filmed along the same road but at the other end - were filmed looking from the south. We can't have a scene around Kowloon City with the required plane-flying-into-Kai-Tak shot, right? 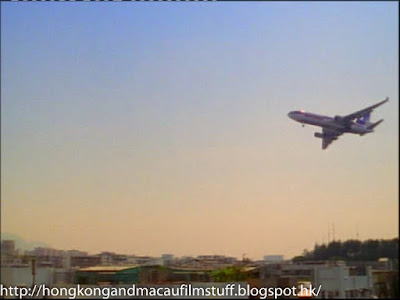 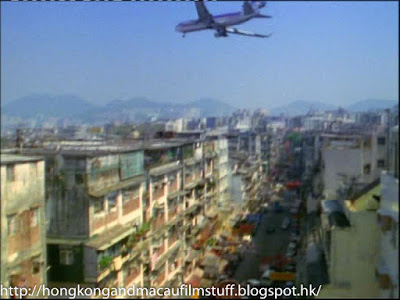 Anyway, the road at the bottom is Lion Rock Road and Kowloon City being the way it is, although the buildings (actually, it's one big block called the Victory Building at 78-144 Lion Rock Rd and you can see it when it was in better condition here) we can see are still around there's no guarantee they will be there for much longer - the whole place is changing. So these views are all looking south and I suspect the camera was placed on the car park roof of the Kowloon City Plaza (we've been up there before) 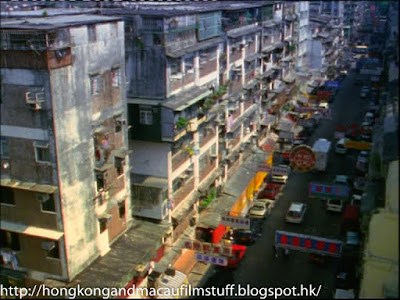 Speaking of the Kowloon City Plaza (now the KCP), you can see it in the background of the following shots - it's the multi-coloured thing at the far end of the road (below the hill). 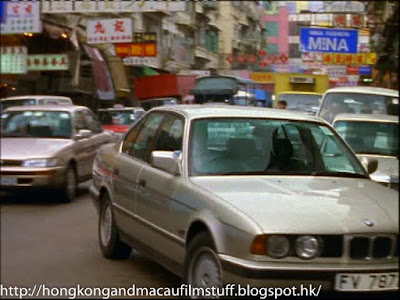 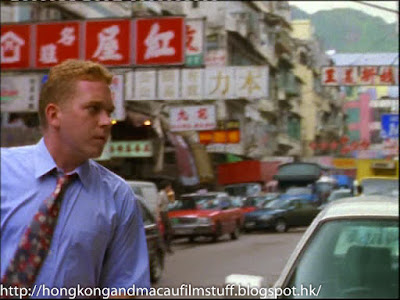 Posted by Phil at 14:25 No comments: Links to this post

The factory where Philby's company is based is the Wah Shing Centre on Sun On Street in Siu Sai Wan at the far eastern end of HK Island. The area hasn't changed much, as you can see from the Streetview shots below. 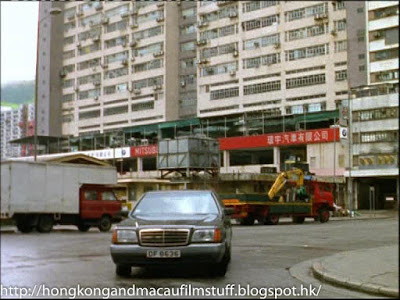 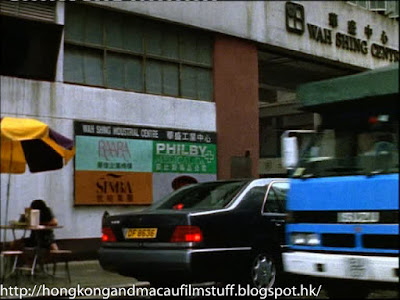 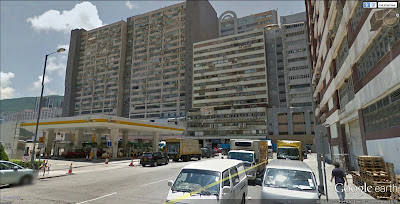 There's also the later scene when the cops are racing to the place and we get a birds eye view of the area including nearby Fung Yip Street (top two pictures) as the cars pull in towards the Wah Shing Centre building. 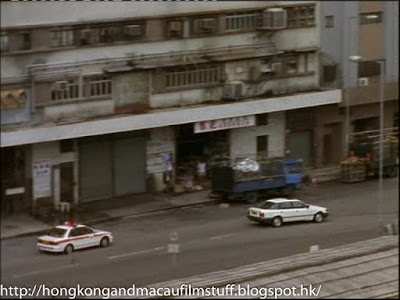 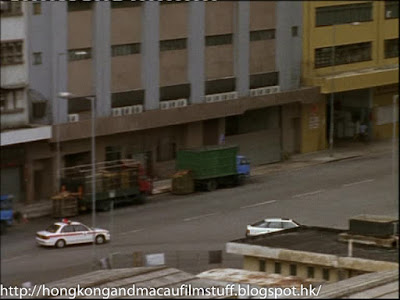 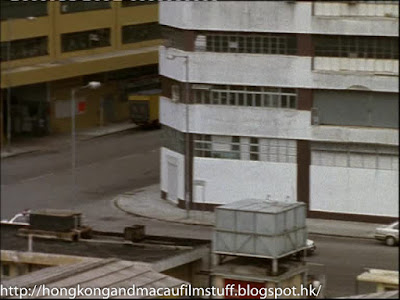 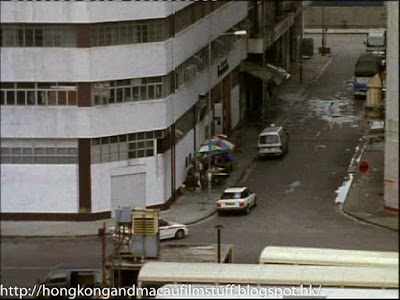 Posted by Phil at 21:56 No comments: Links to this post

The purpose of Fitz's trip to Hong Kong is to take part in a lecture at the University and so one of the initial scenes we see (after the usual HK-wide establishing shots) is a brief glimpse of HKU's main building and surrounding area. 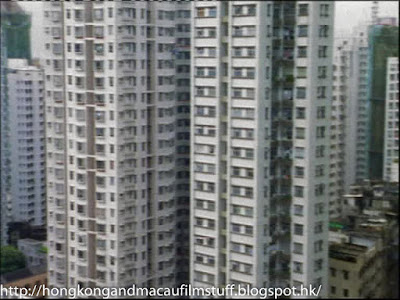 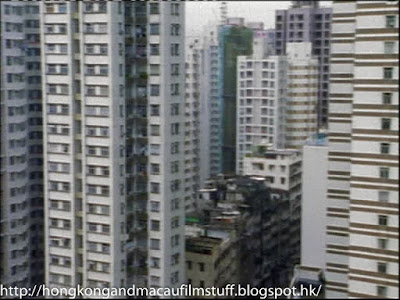 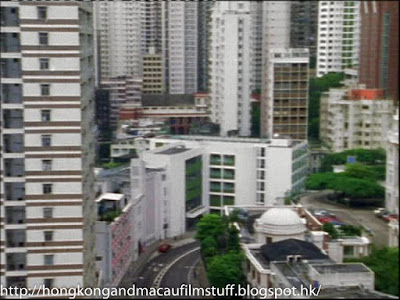 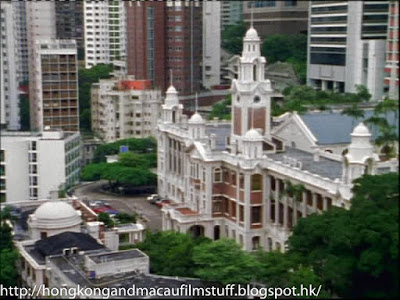 Posted by Phil at 12:44 No comments: Links to this post

In the mid-90's the construction work for the new airport was still underway and part of that, of course, involved the Lantau Link - a road link connecting north Lantau Island with the Kowloon and New Territories mainland. Crucial to that link is the bridge section between Tsing Yi Island and Ma Wan Island - so crucial in fact that when a badly piloted ship hit the bridge a few months ago, the resulting 3 hour closure caused absolute chaos with flights at the airport being missed etc. It's hard to believe that in almost 20 years of operation the bridge is still the only way to access to airport by vehicle although apparently there is now  tunnel being bored from Tuen Mun.

Anyway, here is a quick shot of the bridge whilst still under construction. The view looks like it is from the Ma Wan side of the strait looking towards Tsing Yi. 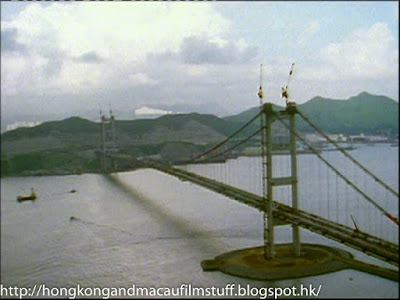 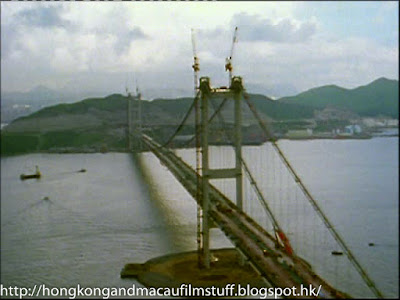 Posted by Phil at 19:28 No comments: Links to this post

I must admit I wasn't much of a Cracker fan when it was on UK television and the only reason I ever watched this special extended episode was because it was filmed in Hong Kong at around the time I was first visiting. There are a few familiar names associated with this episode including Neil MacDonald and Mark King. Neil was of course heavily involved in many of the films already covered by this blog and you can read some of his anecdotes in the link on his name. Another chap is Mark King (now Dr Mark King PhD) who was one of the sailor thugs in the dance scene in Dragon: The Bruce Lee Story (he's the rather big chap holding his cap in the second picture in the link) and he also had a role in the opening scenes of Detonator 2: Night Watch when he gets shot. He was the stunt coordinator and stunt man for this feature length episode.

The production was involved in a little bit of controversy when filming in Wanchai and poor old Neil was kidnapped by triads following an altercation between Dr Mark and a local thug and the rest you can read about in Martin Booth's rather excellent "Dragon Syndicates" book. Anyway, thankfully both are still alive and well and have moved on from the movie world.

The opening scene is very similar to the previously looked at Rush Hour 2 with a sweeping helicopter shot that starts at the back end of HK Island and pops over the mountain range to reveal the city below. 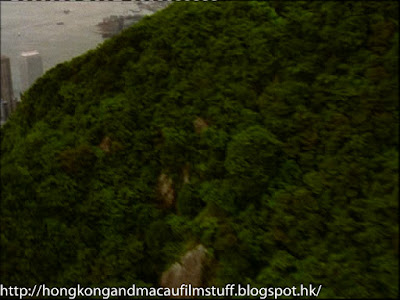 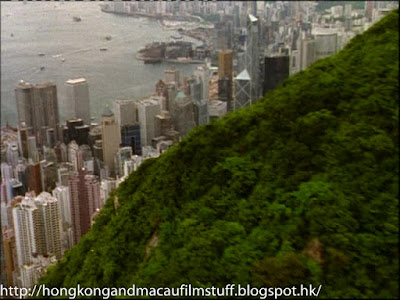 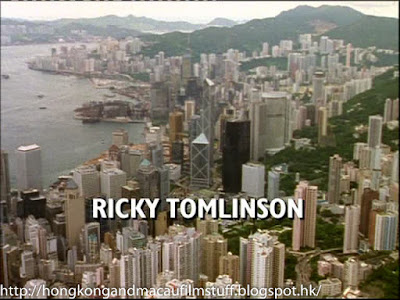 The various bits that are missing and under construction are a great reminder of my first trip to HK in late 95. The Cheung Kong Centre had yet to appear next to the Bank of China building (it was replacing the recently demolished famous Hilton Hotel) and you can see the new wing of the Convention Centre under construction in the harbour.
Posted by Phil at 11:51 No comments: Links to this post

Okay, I know I should've included this on the last post but I only started looking a few minutes ago before realising that this next screen grab was taken a one block to the east of the last Tai Nan St post. Anyway, as before you can still see a few remnants from the shop signs despite the fact that most have been removed. This is actually at the junction with Wong Chuk Street looking east down Tai Nan Street. Lower picture courtesy (as always) of Google Streetview. 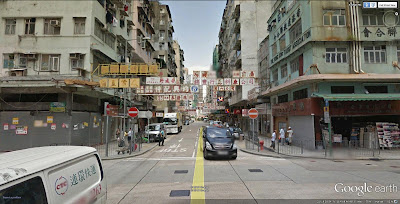 And with that we can finally bid farewell to Rush Hour 2.
Posted by Phil at 17:22 No comments: Links to this post

Well, I guess I am getting better at identifying these seemingly generic local streets because here is one from Rush Hour 2 that I was expecting to take me longer (it actually took me about 5 minutes). It's just another one of those shots that shows off a bit of local life in HK but is irrelevant to the plot. It's a busy street somewhere, adorned in shop signs of a magnitude in number that is rarely seen since the Govt decided to crack down on them (too dangerous/illegal blah blah blah).

It is in fact Tai Nan Street in northern Kowloon and, as you can see from the Streetview below, its number of signs has been drastically reduced, although there are still a few key ones that help identify the location (if you look closely enough you'll see which ones they are) along with the columned shophouse that can just be seen centre right in the screencap. 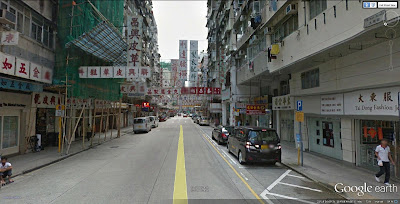 Coincidentally, this is the second time we have seen this exact location on this blog because it was this same stretch of road (at the junction with Shek Kip Mei St) that was used in Transformers: Age of Extinction a while back.
Posted by Phil at 22:59 No comments: Links to this post

Fittingly, the final scene involving Hong Kong is outside the Terminal 1 building at HKIA as Carter is ordered back to the USA. You can just see the Zone 4 sign on the top picture which is actually the furthest drop of area, so the camera was placed at the very far end of the building (as you can see from the Streetview grab below). 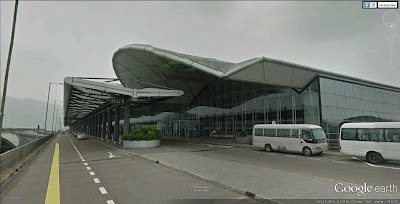 I still have a couple of street scenes to identify, but until then we shall move onto another movie.
Posted by Phil at 23:14 No comments: Links to this post

On his walkabout, Carter (Chris Tucker) performs an amazing feat by walking all the way from Yau Ma Tei Police Station to Graham Street and then Gage Streets in Central (not forgetting the scene afterwards when he also manages to walk all the way back to Marsh Road) - quite an impressive bit of footwork.

Anyway, the first street we see him walking down is Graham Street. Currently being redeveloped for some reason which will no doubt ruin the original character of the place. At the bottom of Graham Street, after visiting a tailor and getting a new shirt, he turns onto Gage Street and starts to talk with the chicken vendor.

Graham Street looking south (up the hill towards Hollywood Road)

Gage Street - where Carter ends up rescuing a doomed chicken.
Posted by Phil at 23:17 No comments: Links to this post

Some of the action takes place in the famous Yau Ma Tei police station on Public Square Street. It's long been a popular location for filming and has recently been decommissioned (May 2016) and it's future doesn't look very clear at the moment which is a big shame for everyone. Let's hope sense shines through and the building can be retained.

Anyway, there's also a lot of the scenes involving the explosion at the station where we are out and about on Public Square Street following Carter as he wanders off in general ignorance of the events unfolding around him. The top picture shows us looking east up Public Square Street, the building on the right is the Henry G. Leong YMT Community centre.

In the third picture we can see a residential building behind Carter with a Wellcome shop at the bottom. This is Block 5 of Prosperous Garden and according to Streetview the Wellcome is still around. I've stuck a Streetview image below to try and match the angle in the lowest picture. 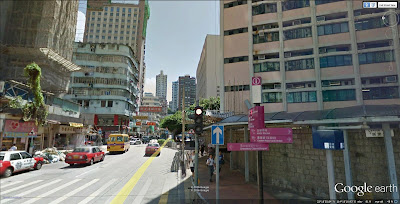 Posted by Phil at 21:36 No comments: Links to this post

The junction between Marsh Road and Jaffe Road features quite a bit because it's where we first encounter Ricky Tan and his entourage. The scenes supposedly outside the sauna were filmed on Jaffe Road but we also see Carter walking down Marsh Road when he accidentally stumbles across the same location later on. The top picture shows us Jaffe Road looking east towards Marsh Road with the latter's road ramp. The same ramp behind Carter as he walks north towards the junction with Jaffe.

The last picture above is looking in the other direction down Jaffe Road and you can see the Canal Road flyover at the far end. There's been a significant amount of redevelopment in this small section of Jaffe Road, most recently with the completion of the Mira Moon Hotel on the corner south east corner of the junction - next to where Carter is standing in the picture below.