Here's one that has been eating away at me for a couple of years and I only really just solved it by being less stupid. The location had evaded me largely because of modern tree growth blocking the view, but a lucky peak of Razor Hill confirmed to me that this was filmed along the Clearwater Bay Road in Sai Kung in the section that skirts around the eastern side of High Junk Peak. 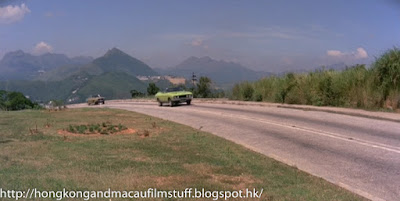 As you can see from the Streetview grab below, the right hand side of the road is now completely covered with high tree growth making the once clear and open view completely gone. 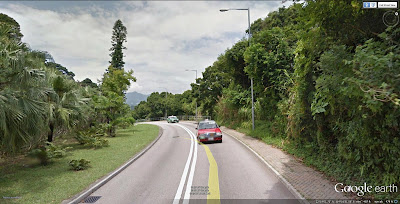 So the next best thing was to find a similar angle but with an open view and I managed to find it on a parallel road that runs on the other side of that tree line. So the bottom picture was grabbed from along Hang Hau Wing Lung Road which runs a little further down the hillside. The angle isn't an exact match to the film grab but you can quite clearly see the same hills in the background - the one dead centre is Razor Hill (it can be seen to the left of the car in the film). Coincidentally, in the top picture from the film there is a brown portion just above the car and I think this is actually part of the back lot at Shaw Bros Movietown - it's situated around that area at the bottom of Razor Hill. 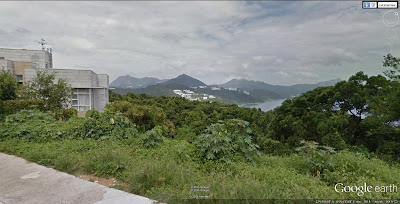 Taken from Hang Hau Wing Lung Road
Posted by Phil at 23:29 No comments: Links to this post

Another trip down to St Stephen's beach for the dragon boat races featured in the Saving Face episode. It's the portion of the water that's in front of the St Stephen's Beach Water Sports Centre. 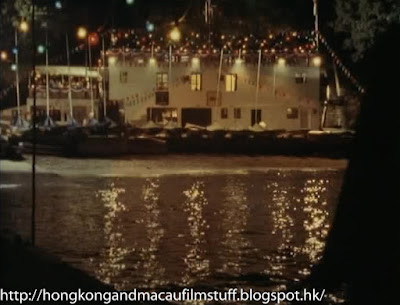 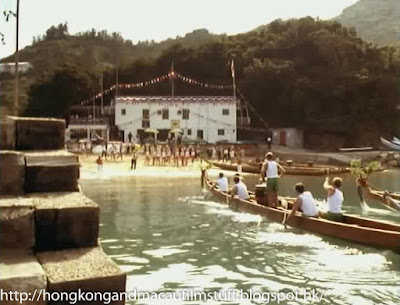 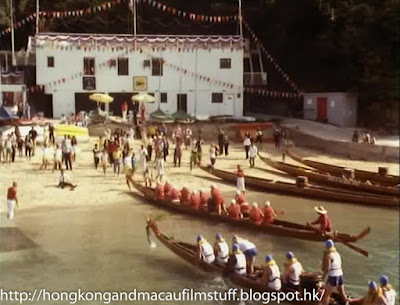 Posted by Phil at 21:57 No comments: Links to this post

Whoops! Another one I had skipped over without realising. It's just after the two escape the marauding hordes at the fruit market. They escape and find themselves all the way over the other side of Kowloon - quite an impressive feat!

Sadly, there is some scaffolding obscuring the view on the current Streetview picture of this location, however, look at the window under the tarpaulin and you can see it's the same pattern that can be seen behind the fruit vendor on the top screen grab. We haven't been out this way since Friends. 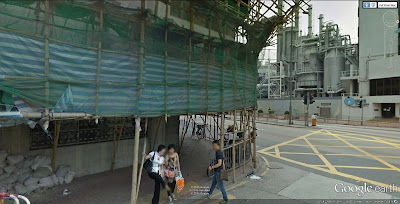 Following the car chase, we get the foot chase with Largo running around the walkways of Central as he tries to evade the baddies. It ends with a rather impressive Jackie Chan style leap onto the roof of a passing bus. There's a few recognisable sections of the walkways, such as...

The steps next to Jardine House

The main walkway from Chater House

...and finally the same walkway as the previous snap (leading to IFC1) where the jump to the bus takes place. The small building left of centre is the Connaught Road Station Building.
Posted by Phil at 09:16 No comments: Links to this post

The car chase ends in Ice House Street where it is then replaced by a good old foot chase running through the walkways of Central. But before we get there, here are the Ice House Street grabs. Streetview gives us reasonable matches on the camera angles. 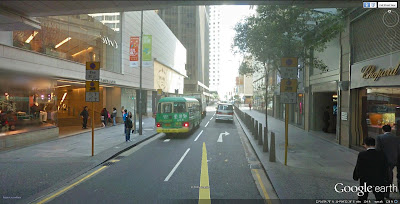 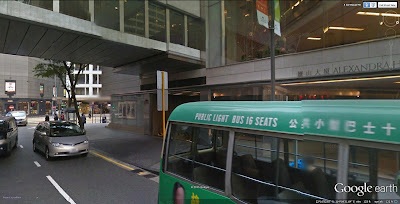 Underneath the walkway to Alexandra House 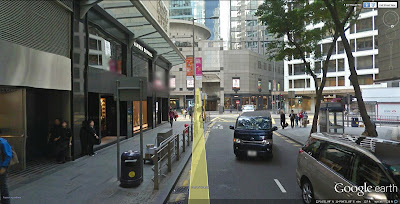 Looking back the other way towards the south
Posted by Phil at 16:30 No comments: Links to this post

The car race back to HK Island takes in a fair amount of territory, some of it makes sense, some of it doesn't. I've included them all in one post because I don't think many of them are worthy of a single post.

Of course, we have just left Sunny Bay and are now racing along the Lantau Link back towards Kowloon and Hong Kong, so it's no surprise to see that the Tsing Ma Bridge makes a brief appearance. Well actually, the top picture shows the lesser known Kap Shui Mun bridge which spans the gap between Ma Wan and Lantau Island. You can tell the difference by the fewer number of crossbars across the uprights.

Coincidentally, just a few days ago the Kap Shui Mun bridge was struck by an illegally travelling Chinese registered ship that was too high to make it under the span. The top of the ship hit the underside of the span and caused a rather unprecedented shutdown of the only road and rail link in and out of the airport. The place was crippled for several hours and it almost reminded me of being back in the UK for a moment when a small amount of snow falls on the roads, or the wrong kind of leaf falls on a railway track.

Anyway, it seems the bridge is fine but the news that came out of it (news for me at least) is that there is currently an undersea tunnel being constructed from Tuen Mun to Lantau - no doubt it is being created for the purpose of linking up with the HK-Macau-Zhuhai bridge under construction, but the added benefit being that things won't grind to a halt if some crazy dude decides top crash his boat into one of the bridges.

Moving on and all of a sudden we see a brief shot of Sai Ying Pun implying the car is now racing along this part of HK Island. I guess he must've taken the Western Harbour Tunnel because that small funny looking blue building in the bottom of the screen grab is in fact one of the ventilation buildings for said tunnel. Here is where Google's new 3D view of HK can be useful, because I have been able to match the angle. The quality of the rendering in Google is pretty good. 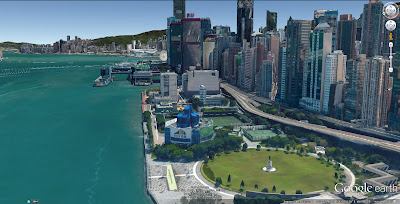 The new development you can see at the bottom of the Google 3D view is the Sun Yat Sen memorial Park which opened in 2010 - a couple of years after filming.

Next up is where the geography goes a bit awry and we see Largo's car speeding eastwards along Gloucester Road in Wanchai. You can see the brown curved facade of the Luk Kwok Hotel on the left. 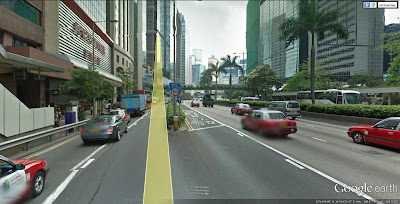 Just when you thought things were getting confusing, we then get another aerial view, this time of the Canal Road flyover back in Causeway Bay at the other end of Wanchai. Again, the Google 3D allows a fairly good recreation of the camera angle for no useful reason other than because I like doing it. 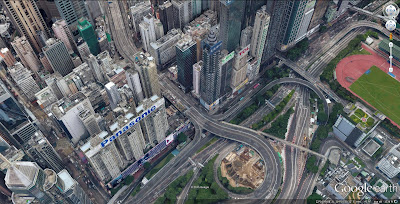 The car chase back to HK Island covers a fair amount of the territory - starting at the airport and ending in Central - a journey that would normally take close to an hour. Largo manages to do it in just a few minutes and we get to see a few places along the way.

Here is a quick glimpse of Sunny Bay Road as Largo manages to gain a bit of an advantage in his super duper Rolls Royce.

We haven't seen Sunny Bay mentioned on this blog for some time, but you may recall it was the place seen in Jackie Chan's Project A where Sammo Hung has hidden some goods in a floating timber yard. Anyway, the choice of this road by the crew seems to be a practical one because it is deserted at the best of times. The palm trees has grown, as expected, but other than that, not much has changed. Although I do hear rumours that reclamation is planned for Sunny Bay at some point - it was one of the sites identified by the Govt as usable for more land for housing - this will be a big shame because it's a very picturesque little bay (when looking away from the MTR station, of course...) even though the timber yard and its floating logs have long gone. 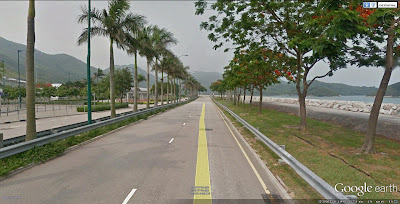 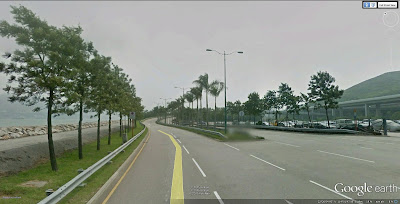 Posted by Phil at 22:07 No comments: Links to this post

Largo's ride is actually waiting for him elsewhere and he gets to it by sneaking through the wire fence at the back of the airport.

Now you see it 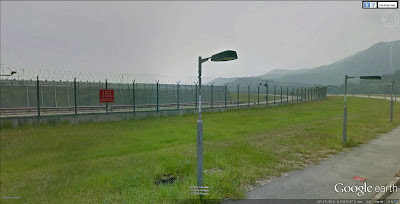 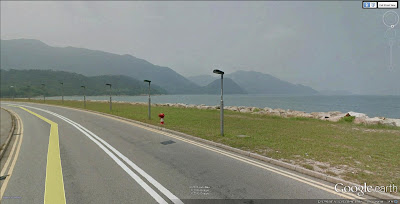 The ridge line at the back belongs to the north west coast of Lantau Island and I believe that, unfortunately, that lovely unspoilt view at the back will eventually have the HK-Macau-Zhuhai Bridge running across it. Just another example of how the Govt wants to wreck HK's beautiful landscape with costly white elephant projects that only benefit their industry cronies.
Posted by Phil at 16:07 1 comment: Links to this post

Another location with multiple posts. This time the airport at Chek lap Kok.

The building where the Rolls Royce pulls out from after the plane has touched down at the airport is actually the HK Business Aviation Centre. This makes perfect sense because this is the place that caters for wealthy travelers with their own private jets.

It's way out along South Perimeter Road, so if you want to sneak a peak at famous film stars or rich business people, this is the place to hang out. 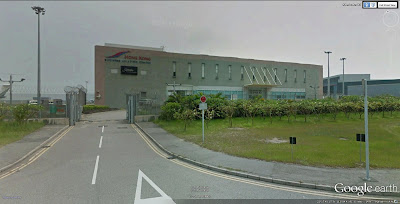 Posted by Phil at 19:15 No comments: Links to this post

This one is a bit sneaky because the film makers want you to think that this is at the airport as the tough dudes await Largo's arrival.

In actuality, this road viaduct is part of the Tsing Sha Highway that leads onto Hong Kong's newest bridge - Stonecutters Bridge. The area is surrounded by freight processing terminals (Container Terminal 8 to be precise) and the building at the back is the office of Modern Terminals Limited. This explains why the film makers chose the upward angle for the camera shot - I guess it was to hide the stacked containers. Anyway, the road we are on is romantically called 'Container Port Road South'.

Here is the current Streetview so you can see that the road does not, in fact, go into the side of the building (trust me, I consider all feasible options when tracking down these obscure places!). 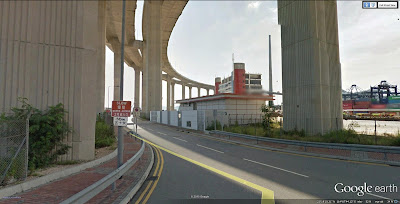 Posted by Phil at 11:42 No comments: Links to this post

Hotel number 2 - although I don't recall a specific reference to it in the film. This one features extensively because its roof terrace is where much of the final action takes place. However, before we get to that bit we also get a quick peep inside including the rather impressive lobby.

Here is the view from the roof terrace. I assume this is actually accessible to the guests but there is always the chance it is used for maintenance and was simply spruced up for the film.

Look carefully and you can see the old Wanchai ferry pier in the bottom left of the lower picture. An additional picture below shows the ground floor of the hotel as Largo sneaks in. 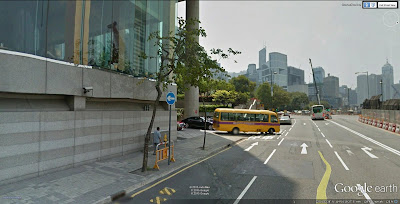