Here is one from Golden Needles initially identified as Tsim Sha Tsui due to what I believed was the Golden Crown Court sign centre left (red words on light blue) that says: 金冠大酒樓

It appears that this has been a mis-identification though, and a friendly anonymous reader has commented (see below) that the restaurant sign was in fact for the Noble Crown Restaurant (華冠大酒樓) much further up the road in Yaumatei at the junction with Waterloo Road. Note the single different character at the beginning of the Chinese name (wah instead of gam). In hindsight I can just make out the top character is indeed 華.

So, anyway, we now know that this scene was filmed - looking north - near to the junction with Waterloo Road which means I think the small curve in the kerb in the lower right is the corner of the small nameless service road that leads to the back of Jade Mansion (on the right) and the Ambulance depot beyond. Here is the updated Streetview. 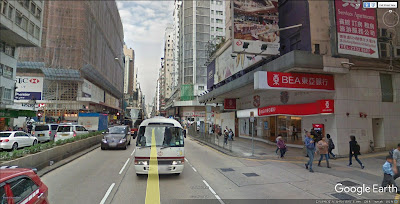 So a big thanks to the helpful anonymous poster for setting me right.
Posted by Phil at 10:04