Well, it doesn't get any more real than this does it? Fake Bruce (Danny Lee) continues his journey up the slopes at the back of Kowloon as he heads towards Beverly Heights on Beacon Hill Road - the actual location of Lee's rather sad demise all those years ago. Not much has changed here as mentioned before. Many of these buildings are old for HK standards - Beverly Heights, where Ting Pei lived and where Bruce died (IMO of course - I subscribe to the theory that he was dead long before the ambulance arrived which is why it made no difference which hospital he was taken to...) was built in 1970 - but still sell for a ton of money due to the relatively large amount of space and ceiling size.

Here we see the car driving up the road. 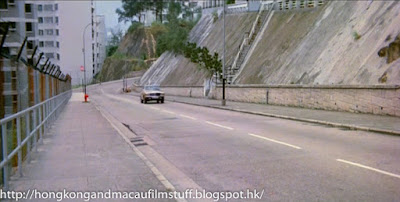 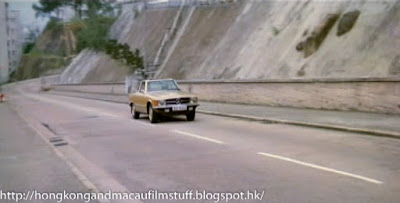 The concrete slope is still there, as is the small staircase, the low wall and the little line of tree that comes diagonally down the slope. The building at the far end of the road (the Luso Apartments) are also still around as is that little hillock next to them. All that has changed really is that the local district council have added some tree saplings along the pavement. 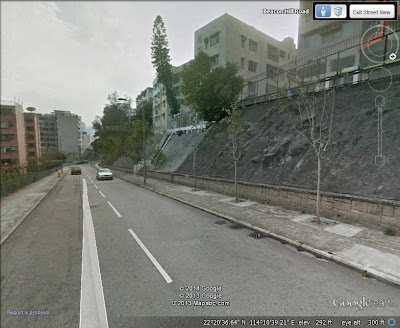 Then as the car goes past the camera we get a glimpse of the corner at the top of the road and just beyond is the edge of Beverly Heights (the white building). 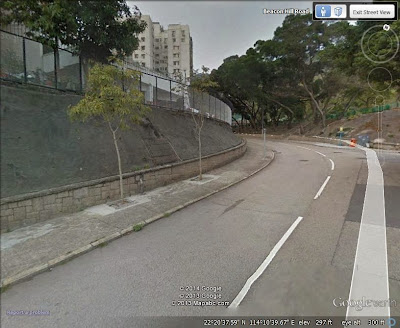 As you can see from the current Streetview, other than some tree growth this place has changed very little. And just in case there is any doubt as to where we are...the road sign is actually pretty much the only thing that has been removed :-) 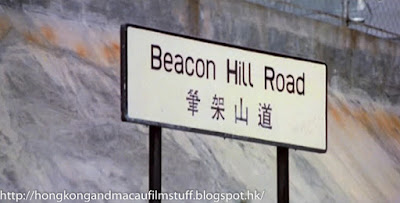