It wasn't just the various plot lines and characters that were pinched from Enter the Dragon, there is also a moment in Men of the Dragon when Martin and Ito go and see there wise master at his serene retreat in the countryside. The following will be more obvious to ETD fans but the fact is that the location used was none other than Palm Villa - the same place that doubled as Han's training grounds in Enter the Dragon.

Appalling quality screen grabs aside, you can see the upper garden with the tree and its doorway that Bruce Lee walks out of at the end of Enter the Dragon (the bit when he gives the thumbs up sign to John Saxon). Look carefully and I would venture that the gold lion statue by the door is the same one seen in Enter (and coincidentally, it is standing in the very same place.

It's quite possible some of the props were left lying around after the completion of Enter the Dragon in 1973, and it's not too far beyond the realms of possibility that the Men of the Dragon guys filmed there not long after...anyway, I'll let you be the judge. 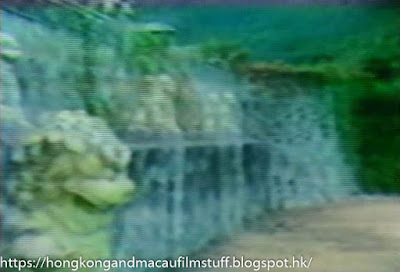 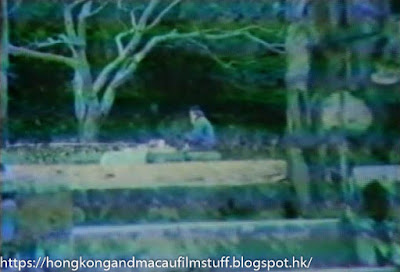 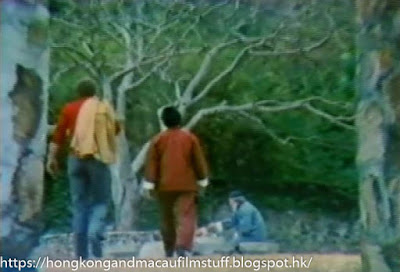 Anyone who has read and understood my previous ramblings on this location (I do mumble quite frequently, so it's understandable if you didn't) will know that this tree (seen above) is the same tree that Lee magically leaps up into when he is about to be discovered by Han's guards on one of his night time recces in Enter, but that was pretty much all we saw of the place in that film. However, the arched stone doorway was seen quite a bit because it fronted the main fighting area. Here is a reminder where you can also see the gold dragon and all the black suits piling through the gap. 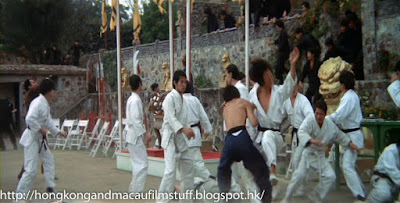 Sadly. that's all we get to see of the place in Men of the Dragon which is a big shame when you consider how iconic it has turned out to be.
Posted by Phil at 10:07