Thanks to Thomas' confirmation of the fact that we can see the Sun Ya Hotel in the following screen capture, it means that this was filmed where currently stands the "One Grand Tower" at 639 Nathan Road. Between Shantung Street and Argyle Street in Mongkok. The One Grand Tower that now sits here pretty much fills up the whole block, so I'm not so sure what number the Sun Ya Hotel was positioned at (probably easy to check but can't muster the energy right now...). What I can say is that the current building was opened in 1986, so I can imagine the hotel was around in one form or another until the mid-80s. Streetview comparison underneath. 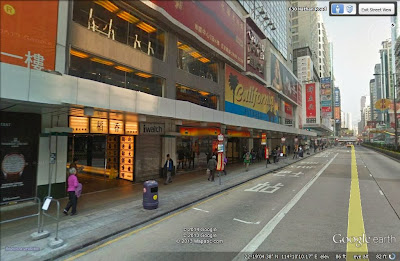 Actually, it looks as though this location was used twice but from two different angles. If you look on the top right of the first picture you can see the bottom of a sign with pink neon writing. Well, looking at the picture below, it would seem that the sign was somewhere on the opposite side of Nathan Road near to the junction with Shantung Street - around where the current Good Hope Building stands. I think therefore that the "President Silk Company Ltd", seen in the shots below, would have been opposite the Sun Ya Hotel in what is now the King Wah Centre. The King Wah Centre was built in 2001, so I have no idea what was there before.