Well, I was just talking about unorthodox views of The Peninsula and so here it is as promised.Yes, this is the real roof of the Peninsula hotel circa mid-60's - the roof top had a bit of an upgrade later in life, I'm guessing when they built the high rise office tower. If you take a look at this aerial view over on FLICKR you can see the bits they were walking along - mainly the roof of the west wing.

Once again this is from the episode So Long, Patrick Henry. 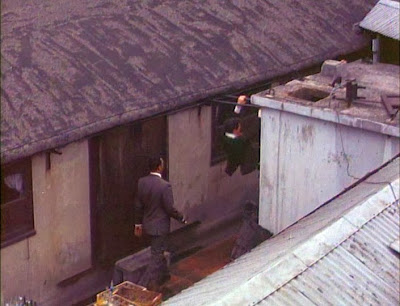 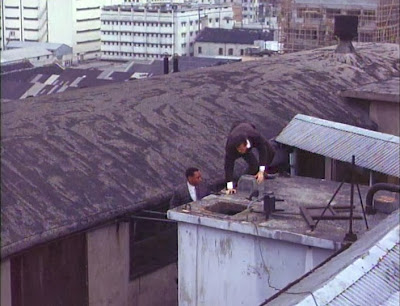 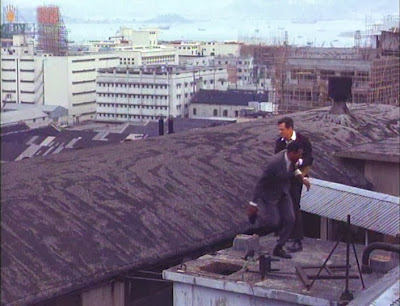 Here we can see behind the Pen and I believe that the building with the "National" advert (see below) on top was part of the Kowloon Wharf and Godown that fronted the harbour. The reverse of the building perhaps backing onto Canton Road (though I am merely guessing here)? The island in the distance of the above shot was Stonecutters Island, although in the shot immediately below we can see Stonecutters and even further in the distance - Lantau Island. Look at the lower left and you can see the roof top of what is now Hullet House, but until recently was still the Marine Police HQ. 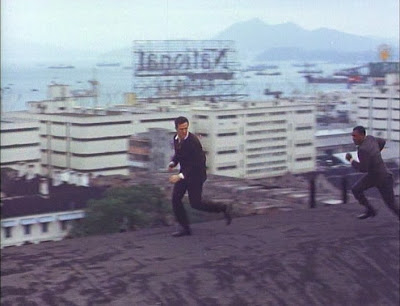 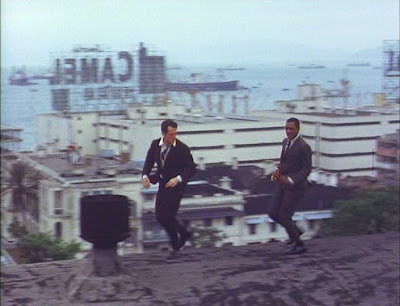 The shot below is interesting for me because it looks as though the camera managed to catch a glimpse of the Hong Kong Hotel being built. The hotel wasn't opened until 1970 so seeing it at this stage 5 years before (these episodes were filmed in 1965) is no surprise. Of course these days it is called the Marco Polo Hongkong Hotel and Ocean Terminal behind it is rather more built up than it was in 1965 (it was still operating as a cargo wharf then). 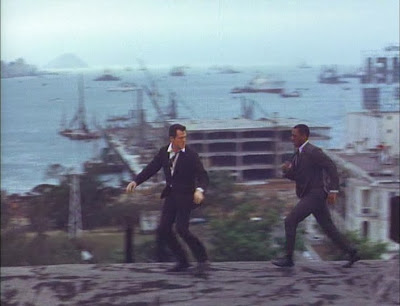 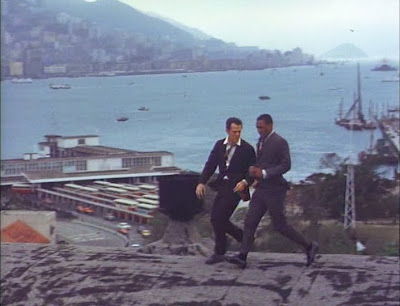 Okay, now we have moved far enough along to start seeing the bus terminus and Star Ferry pier, as well as the KCR terminus and clocktower below. Note that Star House is missing - seeing as this was opened in 1966 I'm surprised there isn't any sign of it being built - or perhaps we can make out some site formation through the trees? 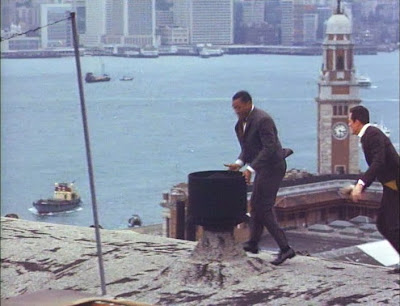 The following shots give us a proper view across the harbour, but in 1965 the famous Prince of Wales had yet to be built (it was built in 1979) although the HMS Tamar Naval base was there - you can see some navy ships in the water in front. It's now the Central Barracks of the PLA. 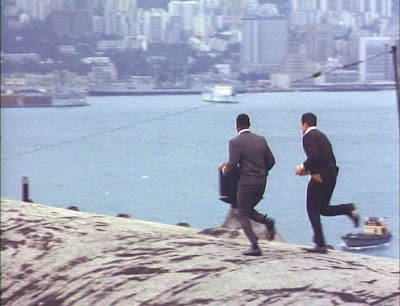 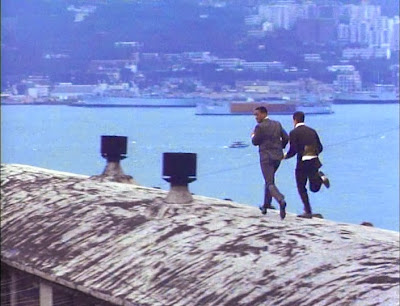 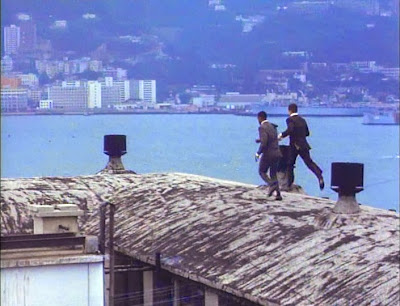 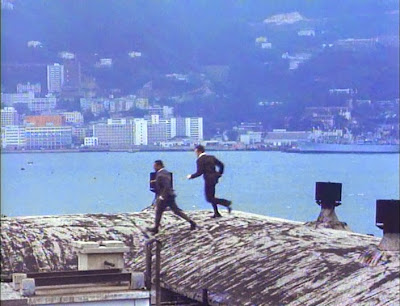 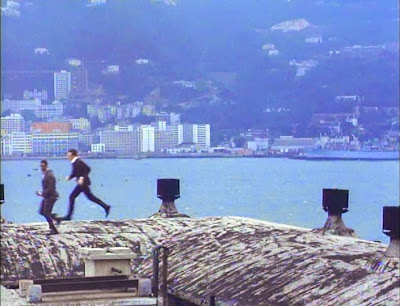 There's a wider angle of the area when we see the pursuers and you can see the blanket of mist that has descended on the mountain on Hong Kong Island opposite. 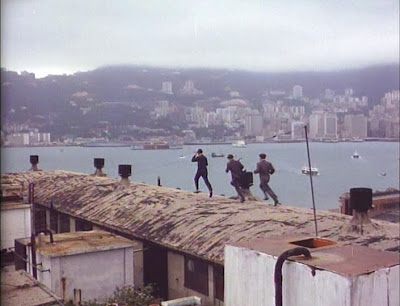 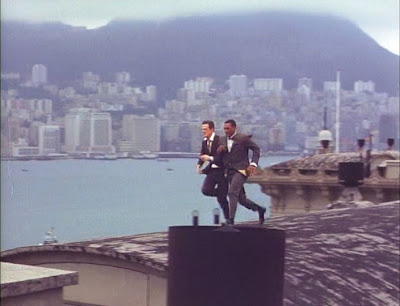 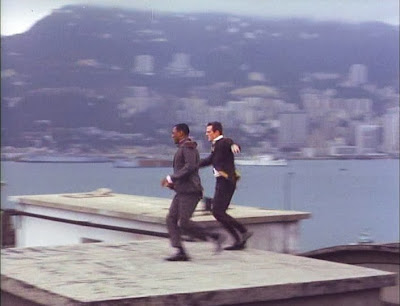 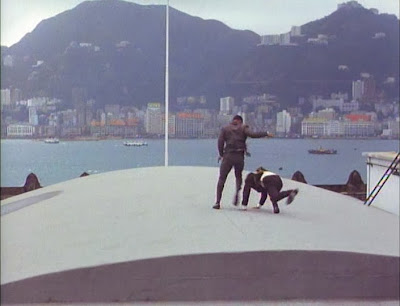 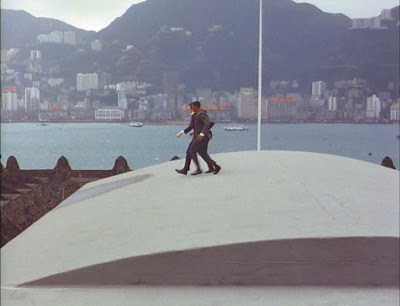 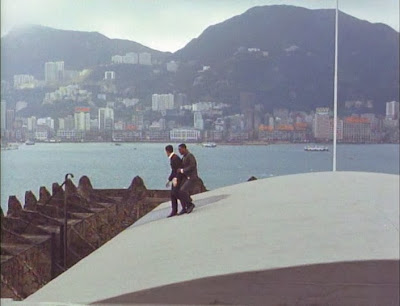 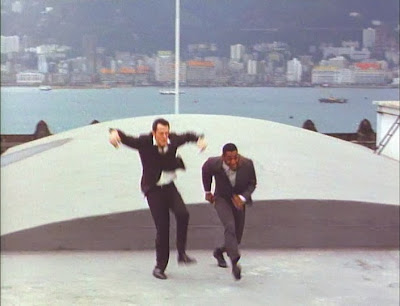 These last few shots on the curved white roof look to be back over on the east wing rooftop (referring back to the FLICKR picture) and you get a nice closeup of the detail at the top of the hotel roof.
Posted by Phil at 00:33