Remember I mentioned the Tai Po Railway Museum in my last post? Well, for those who don't know, the Railway Museum in Tai Po was created from the disused KCR Tai Po Market Railway station. When the track underwent electrification in 1983, the whole process saw the fall of some obsolete stations as new ones - catering for the new electric trains - came into use. Tai Po used to have two stations: Tai Po station in Tai Po Kau (later renamed Tai Po Kau station to avoid confusion) and Tai Po Market Station in the old market area. Tai Po Kau was demolished and the site was re-developed into accommodation for KCR workers, and the Tai Po Market station was turned into this fantastic little museum - well worth a visit if you are in HK.

Anyway, here is another good reason to visit the place: in the episode Affair at T'sien Cha, we get to see Cosby and Culp waiting for a train at this very spot. 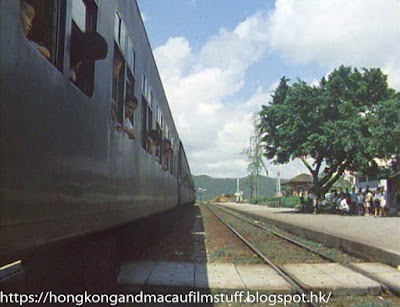 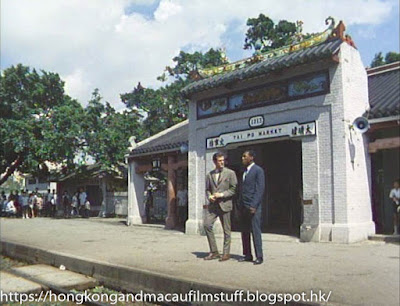 I was totally astonished when AP first sent me these screen grabs, I am so familiar with this place (I lived in Tai Po for 6 years and often took my kids here) and had no idea that nearly 50 years ago Bill Cosby had beaten me to it. Amazing stuff!.

The icing on the cake is also a nicely stitched panorama, also supplied by AP, which shows the platform in its entirety.

I can tell you that the station building still looks pretty much as it does here, although I believe at some time between 1965 and the 1970's a small pedestrian bridge was added to allow people to cross the track when the train was stopped at the platform.

NB: the track was doubled here because Tai Po Market station was one of the designated passing places for trains heading in opposite directions.
Posted by Phil at 14:58