Just doing some catching up with some newly identified locations courtesy of my good friend Thomas - he's just confirmed a bunch load for me so will be putting them in as posts over the next few weeks as time allows. The first is a street shot from Affair at T'sien Cha when Culp and Cosby hop on their rickshaws and head off to the KCR Terminus in TST. Before they arrive at their destination (to catch the train into Tai Po) we get to see a few shots of local streets, one of them being this location where Canton Road meets Argyle Street. Notice the low sloping roofs on the right hand side of the picture - well, I am going to assume that this was the original Mongkok Market area. Seeing as they were filming on Argyle Street, not 100 yards from this spot for some of the other rickshaw scenes, it's no surprise they are here as well. 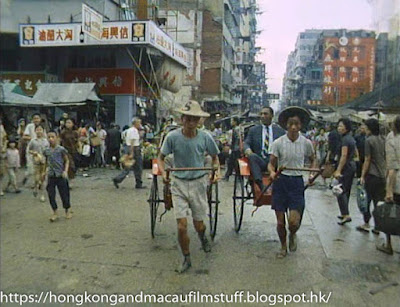 As you can see from the current Streetview below the market has been rebuilt, much like many other former traditional street markets, and of course the roads have been improved and cleaned up but wander around this area and you will still find some older buildings that would easily have been around when Cosby and Co were rolling by. 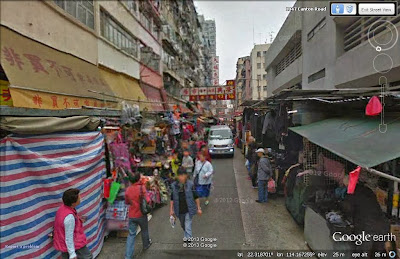