Okay, I'm not infallible and don't pretend to be, so it's no surprise that somewhere I thought was definitely Nathan Road, in fact turns out to be Argyle Street. Another big thanks to Thomas Ngan for nailing this one courtesy of some very impressive detective work concerning a pawn shop seen in the background.

So first off, here is a reminder of the scene from Affair at T'sien Cha. The key to the identification of the area was the white building with red writing on the right in the first screen grab. 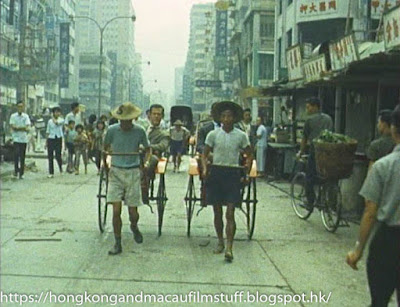 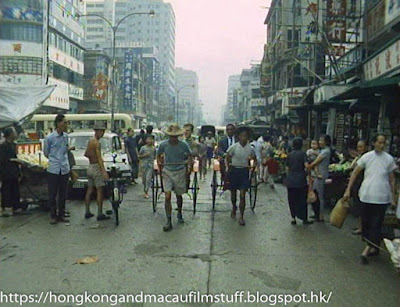 Just as a reminder, here are the comments Thomas made with regards to these pictures:

[see top picture] There was a Pawn Shop in the background (同昌大押)。 The pillars of this pawn shop had been relocated to Stanley. (http://www.flickr.com/photos/horizon616/5492025308/) The Flickr album also mentioned the Pawn Shop was in Shanghai St, around the present day Langham Place.

So, armed with that knowledge, we can say that the camera was looking west along Argyle St at almost the same place now where the Langham Mall and Hotel are situated (they would be on the left hand side of the screen grab). Here is a Streetview for comparison - our first shot a rough approximation of the position of the camera in the first screen grab, the second one corresponding (this is fuzzy science I hasten to add, nothing is exact) to the second grab. As you can see on the lower shot, the Langham mall and office tower are shining away there on the south side of Argyle Street. The original pawnshop (whose pillars now adorn the pavement outside the reconstructed Murray House in Stanley) would have been situated in the corner section where the Kohler sign is. The modern day descendant of that pawnshop is actually now sitting not far away from this original place, a little further along Argyle Street to the east (behind the camera). Although I have to say the older columned pawnshops are much more attractive, architecturally speaking. 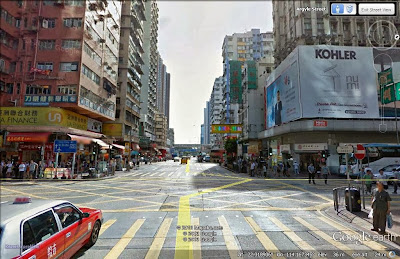 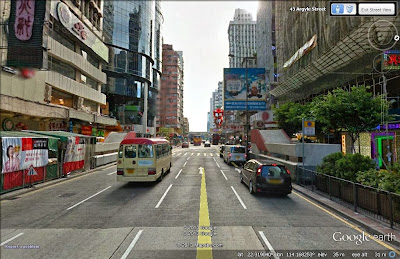 Well, that's another mystery solved with some very handy detective work by Thomas, once again many thanks.
Posted by Phil at 19:09