Brief scene in the film when the hero's love interest tries to get him to spill the beans on the Kumite. Look closely and you will see the hazy distant shape of what looks to be Ocean Terminal when it still had signage on top. We're sandwiched between two ferry piers at this spot, behind Leah Ayres you can see the old HK-side Star Ferry pier, but look back behind JCVD and you will see the old vehicular ferry pier. I initially thought this may have been just along the waterfront, but the angles of the buildings at the back are not quite right, and after a bit of digging around I found a map from 1990 which shows that Blake Pier was still around at this time. So I will stick my neck out and say this scene was filmed from Blake Pier, corrections welcome. 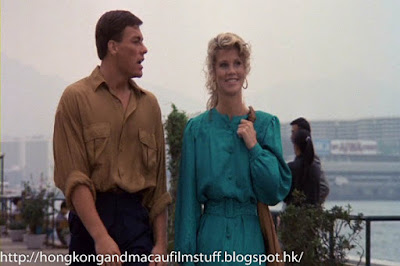 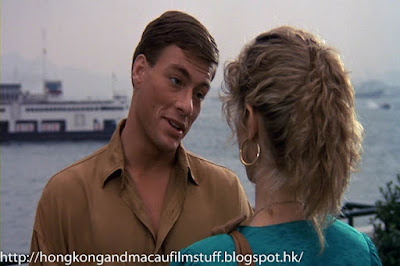 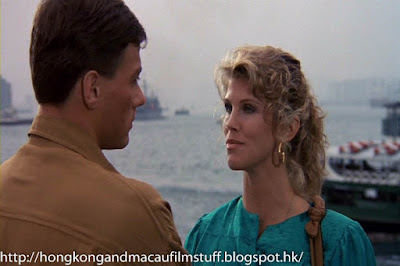 Sadly, both of these piers are no more. The vehicular ferry was closed in 1994 and was consumed by harbour reclamation on which the IFC complex now sits on top of. Although you can still see a few of the old car ferries being used for Bauhinia harbour cruises. The Star Ferry pier went much more recently (circa 2006/7 - around the same time I moved out here) in a flurry of protest and demonstrations and the area was quickly absorbed into the most recent round of Central waterfront reclamation that is, quite literally, a unnecessary waste of space...*sigh*
Posted by Phil at 13:26