For me, this is one of the most interesting (from a documentary point of view) pieces of HK caught on the film. The shot begins with a nice look over to Causeway Bay in the distance (check out the SOGO sign) and then pans down and left as the camera captures some seafront development in TST before ending pointing down at the car park in front of the Marine Police HQ. Actually, I look at this scene with a tinge of sadness for two reasons: it shows two key pints of redevelopment in TST which I feel should have never happened. 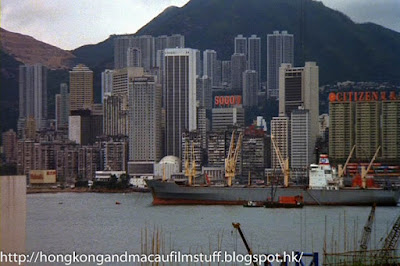 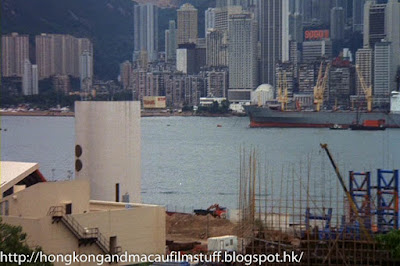 This first section shows us a few things, from the quarrying on the side of Mt Butler (top left), to the SOGO store in Causeway Bay as well as the 1987 waterfront along that section of the island. Look closely and you will see the Excelsior Hotel, Kellet Island Yacht Club, and a small box which marks the area where the cross-harbour tunnel sinks into the water. Of course, this area is still undergoing major works as the 'final' section of harbour reclamation is completed.

As we scroll down we see a load of construction work going on in the lower Kowloon-side part of the scene. I was scratching my head on this one until I realised that what we are looking at is the construction of the HK Cultural Centre along TST waterfront. Yes, that windowless cream-tiled abomination that looked out-of-date the minute it was completed. Remember that to make way for this, a very beautiful and elegant historical train station was torn down (its only remnant being the famous TST clocktower). Well, that was the first piece of regrettable development. The second can be seen as the camera continues to pan down. 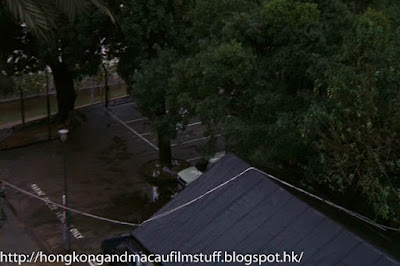 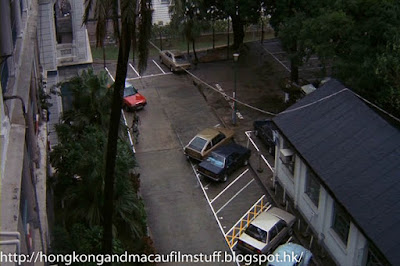 The sad thing about the second part of this scene is that everything you can see, other than the front portion of the Marine Police HQ building, has gone! When Cheung Kong got hold of the tender to redevelop this building they decided to completely excavate the whole front portion of the hill so they could put in a concrete and marble lined plaza surrounded by high-end jewelry stores. It may provide a great photo opportunity for camera wielding tourists but its turned a pleasant, quiet tree-shaded area into a barren glitzy excuse to charge high rents to another big high-end chain store :-(

Thankfully, the Marine Police HQ building itself is a protected monument (although I doubt the penalty for "accidentally" demolishing one wouldn't be very high).
Posted by Phil at 10:44