One of the funny things about the tram ride sequence in this film is that it lasts just a few minutes but manages to take in a whole swathe of HK island - and even involves a change in direction at one point that is only possible in "movieland". However, it's still interesting to see some of the images passing slowly by in the background. Here's an easy one for starters. 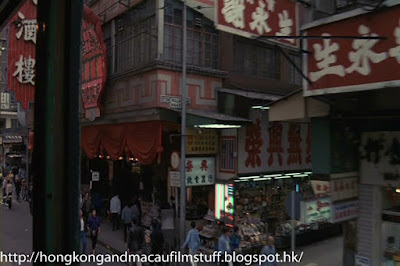 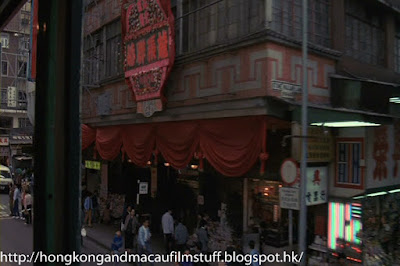 Even without the obvious "Stone Nullah Lane" street sign stuck on the outside of the building, HK aficionados will know that this building is the now demolished Lung Mun Restaurant on Johnston Road. It was such a HK institution (though why I have no idea, when I went in the final month of its operation - you know, just so I could say I had been - the dim sum was shite and we had to eat it in an area where the mildew was black and thick on the ceiling and dropping onto the table!! - oh yeah, and the waiter tried to stiff us on the bill).

It was an impressive building all the same and a local landmark that was around since 1948. The site was sold and redeveloped in 2010 and is now serviced apartments (I think). Here is a bit more info courtesy of gwulo.com.
Posted by Phil at 19:45