Here is one that was a real toughy for me simply because I have no memory of the area and also because the URA have managed to eradicate pretty much every bit of the older neighbourhood when they constructed the monstrosity that is known as the "Masterpiece" (not really the most fitting of names, in my opinion) which houses the K11 mall and the new Hyatt Regency.

To the rescue comes Michael Tomkins, a former resident of the area, who was nice enough to provide the identification of this one. 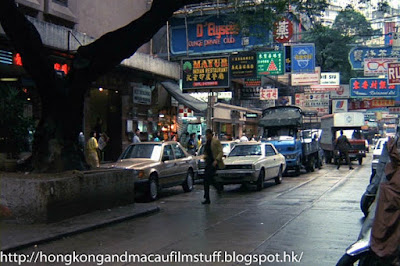 This is (as mentioned in the post title) Hanoi Road and it is one of the streets (that still exists) most affected by the redevelopment, but thankfully there were enough clues on screen to confirm the location. First we have the presence of a large banyan tree in its concrete box, followed by some of the businesses that can be seen including the Mayur Indian Restaurant (underneath the one for D'Elysees), the Home Restaurant (blue with red writing on right hand side) and the partially obscured Eddie Siu tailor sign (white at the back).

As you can see from the modern view below...it has ALL gone!! The sole remaining survivor from the redevelopment seems to be Eddie Siu's tailor at #2 Hanoi Road. The big space on the right hand side of the road is where the K11 mall now stands. Notice the structure behind the van in the shot below as well. This is an entrance to East TST station - another thing that has changed the whole area since it was built and one of the most perfect examples of lack of foresight in city planners (they tore down the much more historical and aesthetically pleasing KCR train terminus in 1978 because it was considered useful anymore - the train terminus was moved to Hung Hom a few years earlier and here we are 30 years later with the Govt having to rebuild a TST train station...) 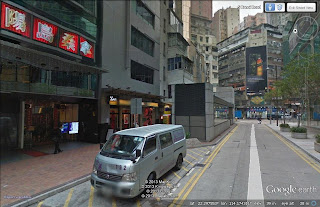 To be honest, I much prefer the character of the area as it was, the new look is just too clinical, clean and generic, and its always a great shame when a big old banyan tree is ripped out for the sake of development.

Anyway, a big thanks to Michael for giving me the identification. More from this part of TST as the chase unfolds over the next few posts...
Posted by Phil at 12:22