Here is a spot that I have been scratching my head over for a vast amount of time. Its anonymity inducing a vast amount of frustration on my part. However, thanks to a small glimpse of a distinctive building facade in the very background I have finally managed to pinpoint its location.

The shot is from the opening sequence when we get the travelogue-style tour of various parts of Kowloon as we see the arrival of the various fighters, and it features a rather wonky-looking line of shophouses. 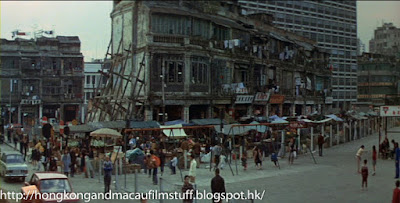 If you look closely to the left of the wonky building - just behind the support struts - you'll see what appears to be a columned building behind it. You wouldn't necessarily recognise it today - it's the Yau Ma Tei Police Station - because the open balconies have all been filled in and the white paint job has been replaced by standard police issue blue/grey.

Anyway, what it means is that the modern building we can see is the older wing of the YMT Jockey Club Polyclinic and the road at the bottom left is Kansu Street. The small street (with the parasols) in front is the end of Reclamation street and it joins with Battery Street in a loop on the right. This old block is obviously long gone (it wouldn't surprise me if it had collapsed immediately after they turned the camera off!) and has since been replaced by the Kansu Street Jade Hawkers Bazaar.

This whole area has, unsurprisingly, changed immensely. The open square has been turned into a basketball court, a new wing of the Polyclinic has been built that now blocks the view through to the Police Station (on Canton Road) and the Gascoigne Road flyover now covers most of Kansu St.

Speaking of the flyover, here is a google grab from there because it provides the best angle to see the area from as similar viewpoint to where they filmed from. 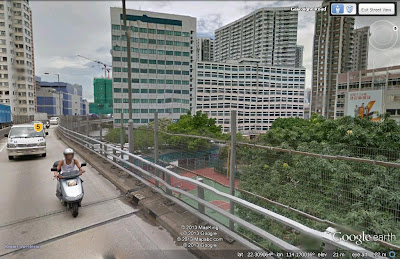