An easy one to identify the street but very difficult in [pinpointing the exact spot along, what is, a very long and similar road. Canton Road to be precise. The signboard clutter has been cleared up significantly in the intervening years but Canton Road is still very popular for 1). its Jade Market at the southern end and 2). its metal workshops (usually containing the two characters 五金 'five metals', which is Chinese for 'metal work').

Look closely on the screen grab below and you will see several signs with these two characters included in the shop name. 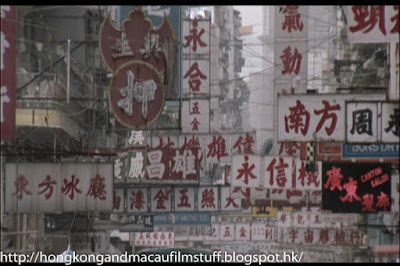 However, luckily for us there is an English signboard that still exists. Look right and you can see a blue sign for "BONS DRY CLEANERS" - it's obscured but it's there.

Look at the screenshot below from Streetview and you can see this is one of the only remaining signs - the blue rectangle centre right. There are a few remaining white signboards but in general these have pretty much all gone - the Govt had a much publicised crackdown on them a couple of years back but I have no idea when Canton Road was 'tidied up'. Anyway, it looks like the circular cornered building in the left of the screen shot above (with the bat-holding-coin-shaped pawnbrokers signboard) may have been removed to make way for a 'sitting out area' (HK's ubiquitous drab concreted 'gardens' with seats for oldies to sit on) and a municipal toilet/refuse collection building. 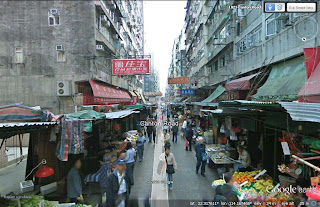 Oh, I forgot to mention this is the section of Canton Road sitting between Nelson Street and Shantung Street in Mongkok.
Posted by Phil at 21:48