Back to Hong Kong again but staying with the tenuous link of Happy Valley and we have a quick snippet from the car scene at the beginning of the film as Frank follows his friend's car back to their house as he watches for anything untoward.

It's a brief glimpse but we see the cars driving down Wong Nai Chung Road on the west side of the Happy Valley Racecourse. 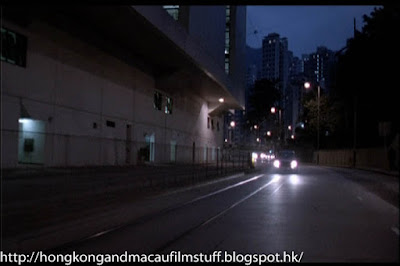 I must admit, I was a bit flummoxed by this place at first because the tram line made me spend a long time looking up and down the main tram route for a similar area - to no avail. It wasn't until I noticed that there is only one tram rail that I realised it must be a part of the line off the main route. My excuse is I haven't really explored this part of town other than visiting the nearby Muslim Cemetery 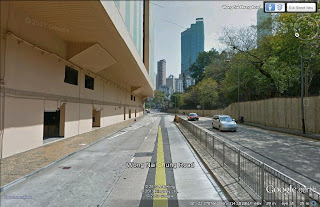 Anyway, the above Streetview grab shows the area today - hasn't changed a bit unsurprisingly other than the appearance of an extra high rise at the back. The wall on the right by the way marks the various cemeteries along this stretch of which the Muslim site is just one.
Posted by Phil at 10:10 No comments: Links to this post

Aberdeen can be seen a couple of times in this film - the first time is when Frank (played by Geoffrey Lewis) smuggles baby JCVD away from the bad guys via a sampan in the harbour. He boards the boat on the Ap Lei Chau side of Aberdeen Harbour and we know this because quite clear in the background is the Hung Shing Temple that occupies the waterfront on Ap Lei Chau. Here is a screen grab from the sampan complete with a Hoklo boat woman working the controls. She doesn't look too amused about being filmed does she... 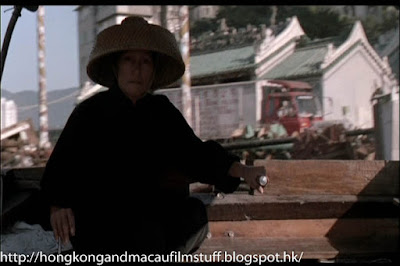 For a more modern view of the temple there is a nice picture here on Panoramio. When this was filmed in 1991 the waterfront was a bit of a mess but the govt has done a fairly decent job at beautifying it and making a fairly nice location. That side of the harbour also gives you better views across the Aberdeen (IMO). 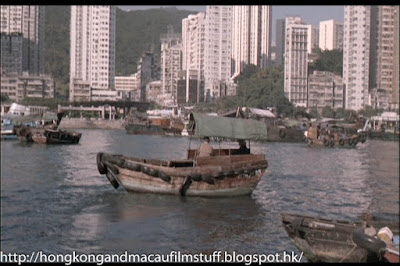 On these two shots you can see the line of buildings that sit along the Aberdeen Praya Road, some of these buildings were there when Bruce Lee filmed Enter The Dragon twenty years previously and the wooded hillside behind them is the same hill that still houses the old Police Station (now a youth centre known as the Warehouse).

Aberdeen is also seen later in the film when JCVD is being pursued with his brother's girlfriend by the bad guys. The scene ends with them jumping into the water to escape but before that we see some of the usual hopping around the flotilla of boats. Then Cory Everson jumps into a chopper and follows the boat back to their hideout. 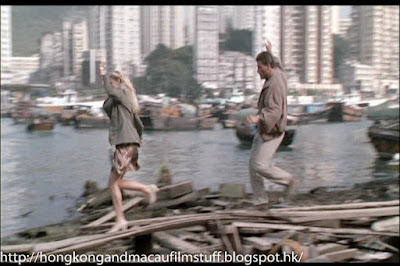 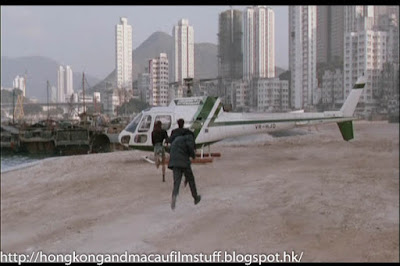 Posted by Phil at 18:44 No comments: Links to this post

Sometimes trying to locate certain streets in HK is a bit like trying to find a needle in a haystack and when so many places look the same having a small (but useful) knowledge of written Chinese can save a world of pain. A prime example was my efforts in tracking down the location of Chad's riff raff bar.

In the end it was a small sign for a noodle shop that gave the game away, so many thanks to Wing Hing Noodle (永興麵家) for at least still being registered on the English Version of Open Rice despite it being closed (for how long I don't know).

Anyway, here is a few screen grabs to jog your memory. 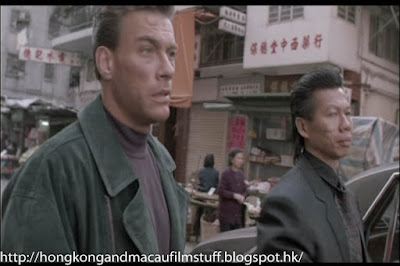 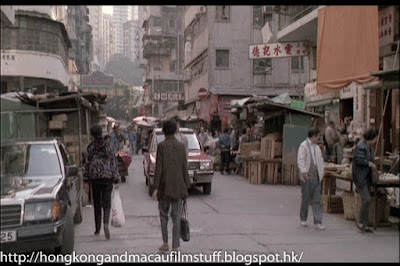 See the building above with the stop sign next to it? That's still there. Just to the left of the stop sign is a white/red horizontal sign with 4 chinese characters on it. That sign is for the noddle shop I just mentioned. here's the same(ish) view today. 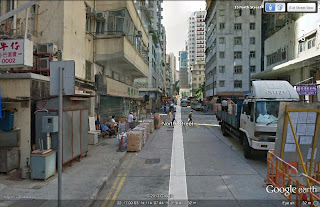 Next we can now find out where JCVD was standing when he was accosted by a very seriously ugly Bolo Yeung. 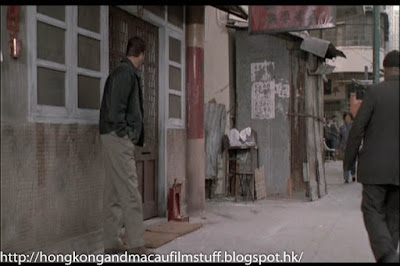 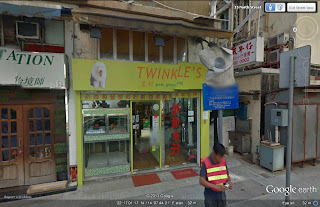 I haven't quite managed to get the correct angle, but the place he was leaning is now a pet store called "Twinkles" (oh dear...). The alleyway by the side of the shop still has a metal cabinet parked in front - it's similar to the one that we see in the JCVD shot above and although I don't think it is the same one I am quite confident that it probably belongs to a hawker/street seller and is used as a street stall. This being HK it is very feasible that the person who runs it was the same dude running it back in 1991 (note to self: next time I am in Kennedy Town I will take a few pictures down and ask whoever is there is they remember the filming). 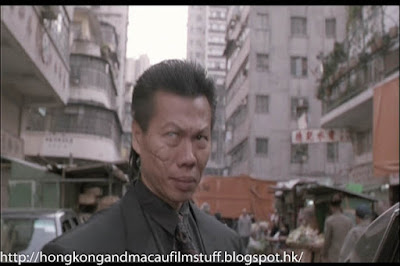 Oh Bolo, you IS ugleeeeeee 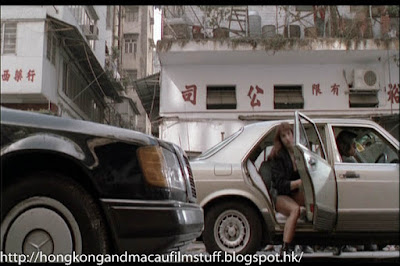 Next we see Corey Everson looking the worst I have ever seen her (must be the haircut) jumping out of a car just before the big showdown in the bar. See the white building opposite? Well, check out the streetview shot below. The building is still there (or at least was when Google sent there car around a couple of years back) and look carefully you can just make out the red Chinese characters that form the company name (of whoever was renting the place I guess). Look between the arm of the crane. 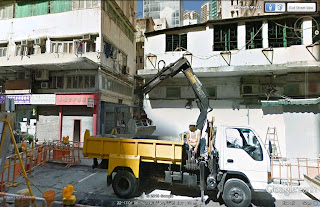 Finally, after all that running about down alleyways and markets streets, JCVD manages to get away from his pursuers by running around in circles and ending up back on North Street, but this time further up next to the stop sign and noodle bar sign (mentioned earlier). 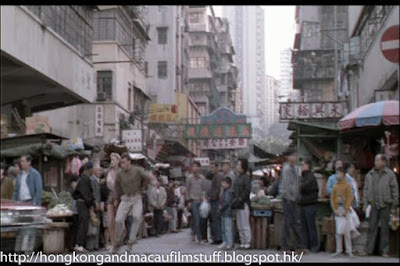