The opening title sequence gives us a different view point though and takes us from west to east. First off we get to see the backside of High West (Lung Fu Shan) as the camera sweeps across and reveals Mount Davis and Kennedy town. Look carefully and you may be able to see the twin chimney stacks of what I believe was the Kennedy Town Abattoir, as well as Green Island and just to the distant hazy left is Kau Yi Chau (aka Han's Island from the B&W composite photo in Enter the Dragon). 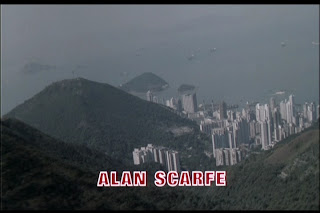 Next we move over a little more to the east to just behind HK University and can see various buildings that are still around - not surprising seeing as this film is only a little over 20 years old. For example in the shot below the three buildings at the front bottom are on Po Shan Road and are called Piccadilly Mansion, Hamilton Court and (one block of) Po Shan Mansions, respectively. The tall building top left is Hong Kong Plaza and the three identical blocks on the right are the three blocks of a development called Connaught Garden. 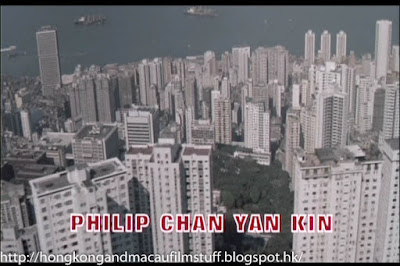 Next as we move along we now look over the harbour. I like this shot because I can actually see where I live (although it's a wee bit blurry) in the far distance. But you can make out the transceiver on top of Beacon Hill (that tiny white splodge on the hill in the back centre and if you know your HK geography you should be able to guess that the next major bump in the ridgeline (to the right) is actually that of Lion Rock. 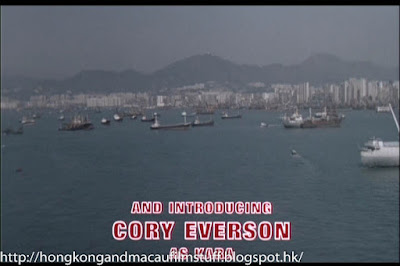 The camera keeps speeding east (to the right) and this time on the far right we can just make out the Ferry Point Estate a.k.a Man Buildings - they've been around since the early sixties and are fairly recognisable, however, this is a view that can no longer be found because the West Kowloon reclamation has blocked it all off and instead these days you will just be able to see the skyscraper development which has the new ICC as its centrepiece. 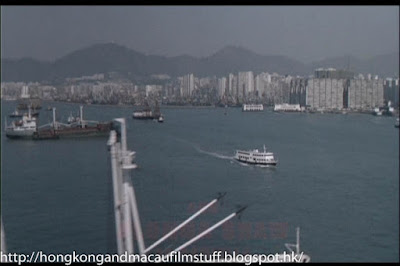 I was expecting the skyline to be a bit clearer on this DVD - but it seems as though even back in 1991 (well, actually I think the filming took place in 1990) there was a fair amount of haze over Kowloon. Not as much as today but more than I expected...
Posted by Phil at 23:19