Another one that has taken a while to find but still here we go, it's the Tin Hau Temple that JC stops in front of during the bike chase. I can't confirm whether or not this is the same village where some the other bike sequences takes place (would need to visit in person) but here is the temple from the film as a reminder. 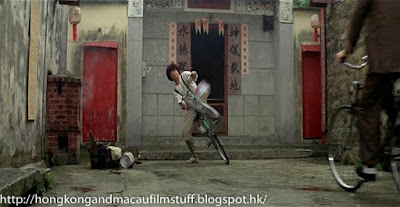 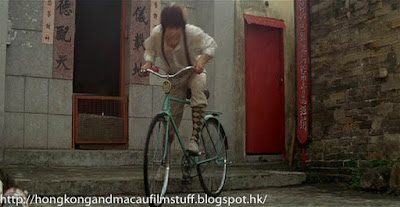 There has been a recent renovation to the temple and the area next to the red door above has been knocked through but the temple is still fairly recognisable. Here is a modern view courtesy of Chong Fat's picture on the Tin Hau Temple wiki page. 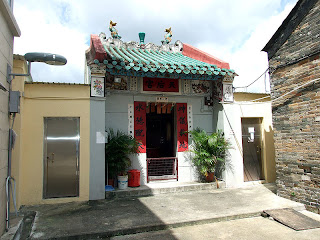 Photo: Chong Fat on Wikipedia
Posted by Phil at 22:05 8 comments: Links to this post

Aberdeen has been seen in so many films on this blog - I guess it was a place renowned for showing a different side to HK life for some people and it's been used time and time again, for example on Enter The Dragon, The Protector, The World of Suzie Wong, Flatfoot in Hong Kong, Tomb Raider 2 as well as a brief glimpse in Soldier of Fortune. However, it could be argued that this was the film that did it first. So here we are as Holden and Jones head to the Tai Pak.

We get to see them driving along (a very different) Aberdeen Praya Road in his little car and turning onto the famous shore front that held the restaurant piers at Wu Nam Street (they have since been moved to Shum Wan Pier Drive). If you read my Flatfoot in Hong Kong post on this place you'll know that this area has long been reclaimed and is now used as a bus stop.

Look carefully in the background of the above snap and you may just be able to spot Aberdeen's famous Tin Hau temple hiding at the back. Whereas below we can see Wu Nam Street - seen from harbour looking inland.

The small signs on the boats above say 白花油 "Baak Fa Yau" a.k.a White Flower Oil. Still a popular ointment here in Hong Kong and especially good for stopping the itch of a mosquito bite.
Posted by Phil at 11:31 No comments: Links to this post

This location has often been mistaken for King Yin Lei over in the Wanchai mid-levels and it's a mistake that seems to have gained a bit of misinformed traction (also the notion that the Repulse Bay Hotel was featured in this film: it wasn't!).

This building was located at 41a Conduit Road and was known locally as the Mok Villa - named after the family who owned it - or by its official name of 'Fairview'. At the time of filming though it was home to the Foreign Correspondents' Club (F.C.C) and its connections to this film go a bit further than just it being one of the locations used.

Throughout the film the house is used to represent what is described at one point as 'Victoria Hospital' where Dr Han (Jennifer Jones) works as a doctor. The terraced gardens are featured more than the actual house though (all interior scenes were filmed back in the US on a sound stage) and we are led to believe that the hospital backs onto the famous windy hilltop.

In reality though the hilltop was in fact located in California at the former Fox Ranch (now part of Malibu Creek State Park) and the hillside behind the house was actually only about a third of the way up Hong Kong's Peak.

The other connection to this story is that the ornamental pavilion seen above in the buildings grounds was the real life location where the real life Han Suyin met her lover, Ian Morrison, who was a journalist from Australia and no doubt was a member of the F.C.C.

This splendid building was knocked down in the mid-1960's and was eventually replaced by a development called Realty Gardens in 1971 which still stands there today. The current development also has a small ornate pavilion in the grounds (the terracing remains fairly unscathed but the ornaments you see above are all gone) which for a while some people mistakenly believed to be the same one seen above. Alas, it is a modern replacement that was built on a slightly higher level to the original one. There is a great summary of the building over on Richard Wong's FLICKR page and it's necessary to read all the comments: https://flic.kr/p/8jNYZx

The thing I find most staggering about these grabs are the fact that there was a completely open view of the harbour back then. This view has slowly disappeared as more and more high rises have filled up the hillside.
Posted by Phil at 08:05 No comments: Links to this post

Whoops! I made a booboo and misidentified the following location as Macau's Inner Harbour. 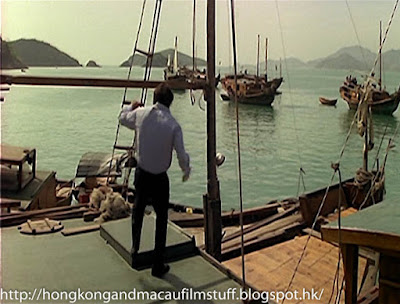 Well, the sequence involves Bud fleeing from some unsavoury types in the Macau Floating Casino. He runs outside and jumps onto a small boat before hurling himself into the water (Bud was actually and Italian Olympic swimmer at an earlier stage in life). Well, stone me if it wasn't actually the water in Repulse Bay he jumps into. You can see by the small islets in the background that this scene was filmed very close to the previous Tin Hau Temple one.
Posted by Phil at 21:58 3 comments: Links to this post

Well, the final post for Flatfoot sees Bud go to a former famous landmark (or should that be watermark?) that was moved some time ago now. It's the floating Casino that used to be moored in the inner harbour and was also featured on The Man with the Golden Gun as well as the Noble House miniseries. 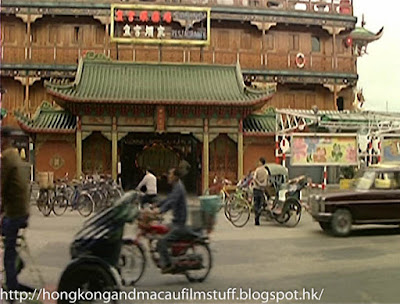 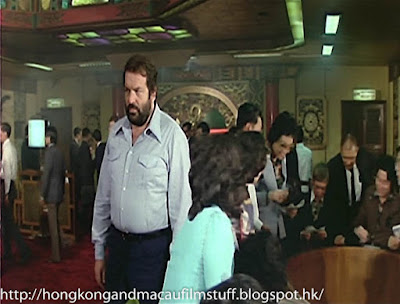 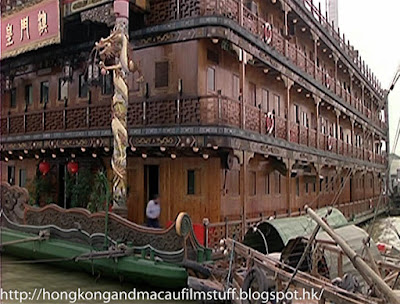 The casino was moored on the Rua Das Lorchas around the section where it intersects with Av. De Almeida Ribeiro but was decommissioned sometimes in the 90's, after which I'm not sure what happened to it. Judging from the photos above it was quite nicely built.
Posted by Phil at 10:18 No comments: Links to this post

What film shot in Macau could be done without at least a quick peek at (arguably) Macau's most famous landmark. The ruins of St Paul's. Lo-and-behold, down the hill comes Chaplin's chauffer-driven car - at a time when traffic was still allowed around there. 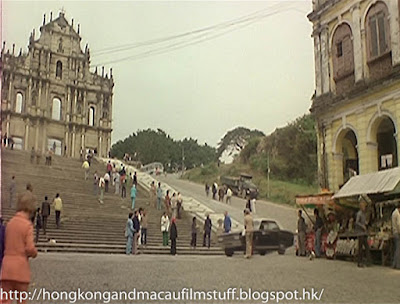 Posted by Phil at 20:56 No comments: Links to this post

Now we move the action over to Macau and one of our first shots is taken from the praya overlooking the channel between the Macau Peninsular and (what was) Taipa Island and the bridge linking the two: Ponte Governador Nobre De Carvalho. 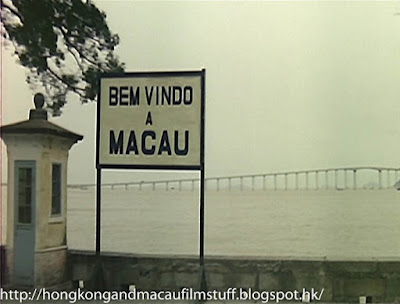 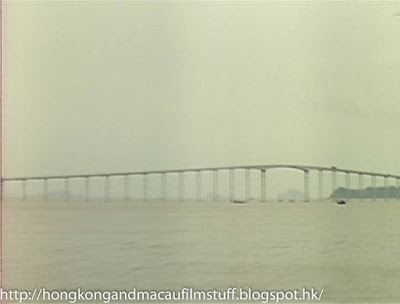 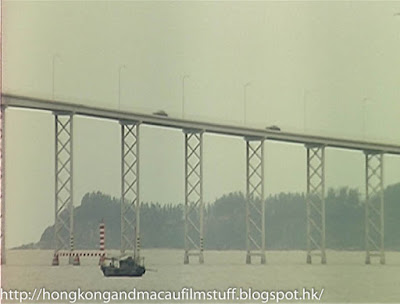 These days the view is now obscured by the reclamation that has created the Sai Van Lake and the Macau Tower but everything else has stayed put including the low wall with its drain holes which can be seen in the top shot.

Of course at the end of this bridge on the peninsular side is the famous, original, Lisboa Hotel and casino - owned and run by Stanley Ho (well, actually now that his family has divided his interests up between them, strictly speaking all he does these days is dribble from the corner of his mouth and get his catheter bag emptied every once in a while). And so here we see it through the drivers windscreen (just to the left of the dude's head). 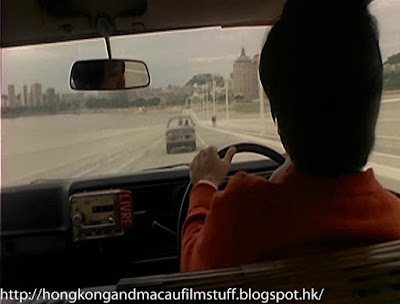 Posted by Phil at 10:15 No comments: Links to this post