Foiled at the ferry terminal, Flatfoot follows Chaplin to Macau by commandeering a helicopter (hence the last picture in the previous post). On his way we are treated to a view of what I assume is an American Aircraft carrier, junk boats in Aberdeen Harbour and finally a rather nice shot of Kau Yi Chau island - which lies about halfway between Hong Kong Island and Lantau. 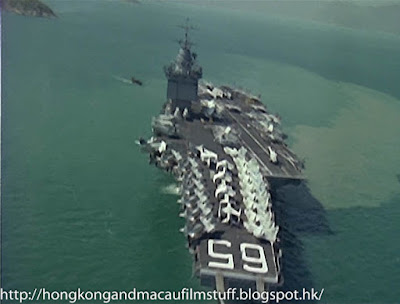 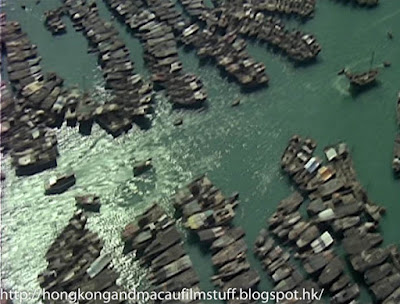 Regular readers of my blog may also realise that Kau Yi Chau also goes by another name: Han's Island. It was the island used by Warner Bros featured on a B&W composite photo supposedly of aforementioned criminal mastermind's island fortress (the composite had King Yin Lei and the Palm Villa tennis courts superimposed). In Flatfoot in Hong Kong we see it 'au naturel' - as the green hilled uninhabited island that it is. 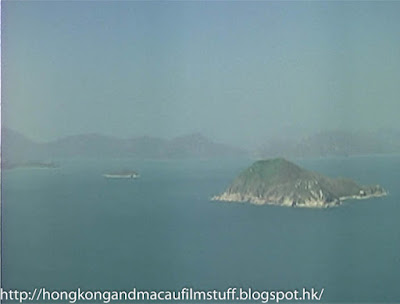 Posted by Phil at 23:26 No comments: Links to this post

Here's a place we've seen before - it featured on the previous year's effort starring Roger Moore. In this film we see Bud following Chaplin Chang to Macau and therefore catch glimpses of the old ferry terminal and the car park in front that have long since been replaced by Stanley Ho's Shun Tak Centre. 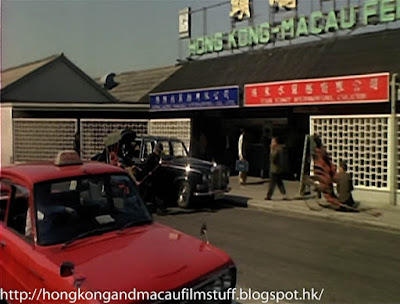 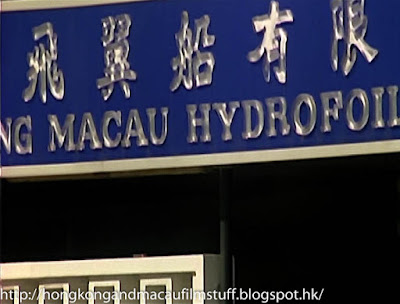 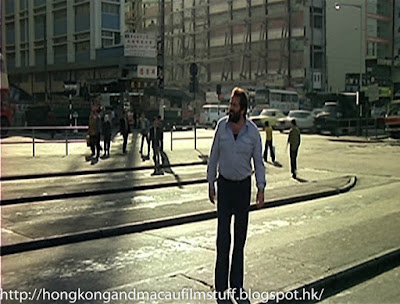 We also get a quick glimpse at one of the old ferries called the Nam Shan. 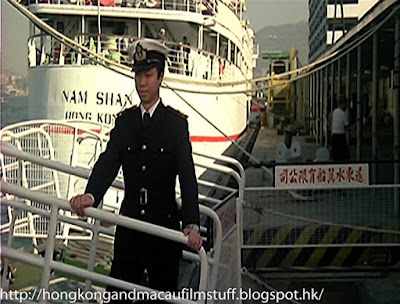 Posted by Phil at 20:29 No comments: Links to this post

No, not a ship, just a very famous military base named after a ship. The famous waterside military base was taken over by the PLA in 1997 (of course) and the iconic blocky mushroom-like building was renamed to the "Chinese Peoples Liberation Army Forces Hong Kong Building".

Another recent change is that it's no longer prime waterfront property, but like many other previous waterside location has now been moved slightly inland (relatively speaking) thanks to the Central to Wanchai reclamation project that now has the new Govt HQ sitting on it. 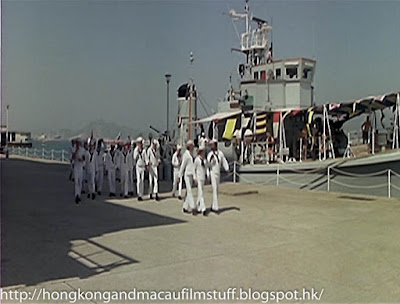 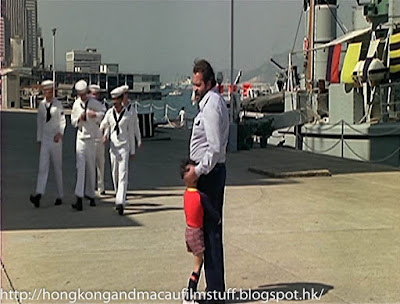 In 1975 it's not so much the Tamar site that is interesting (which it is of course) but rather what can or cannot be seen in the background. In the case of the snap below we can see the hillside behind and what used to be Victoria Barracks. This view is now completely blocked by Pacific Place and the barracks themselves have been replaced by Hong Kong Park. Some of the old barrack buildings remain, but not the ones you can see here on the hillside at the back. 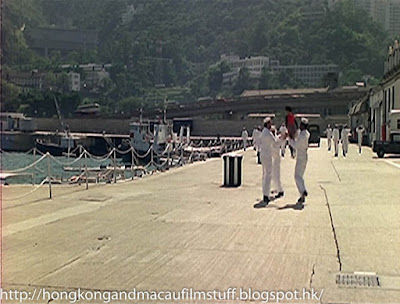 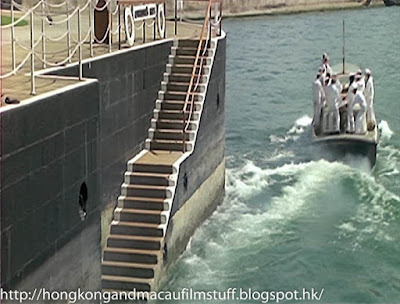 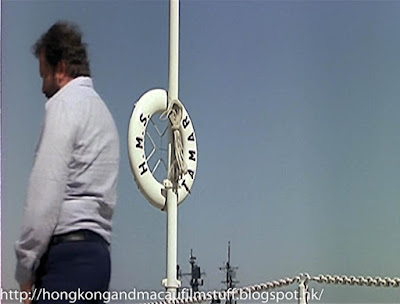 Then we are spirited back to Hong Kong-side as Bud and his young charge walk along Chater Road with the old Hong Kong Club building behind them, as well as the Cenotaph and the Supreme Court (former Legco) Building. Bud sits the kid down on the side of one of the Statue Square pools. 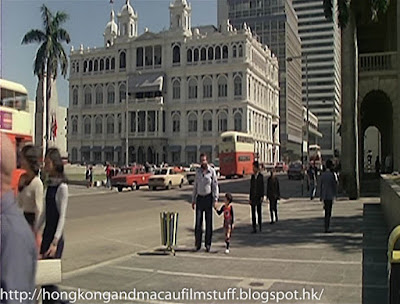 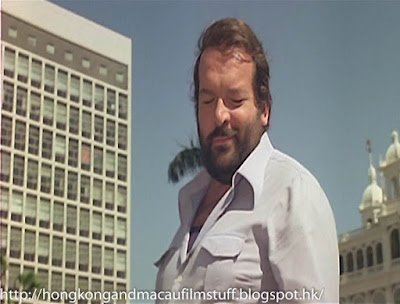 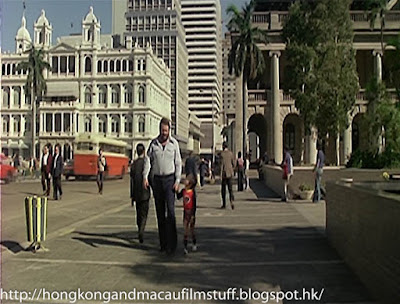 At one point the heroes go to a sumo wrestling fight (in Hong Kong!!?) before getting shot at and then old flatfoot storms out of the arena and pops out of Macpherson playground onto Nelson Street. Things around here have changed a lot but look at the background and you can still see one of the old buildings there. 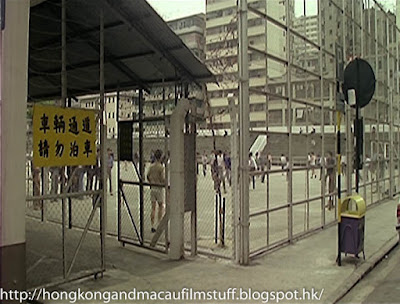 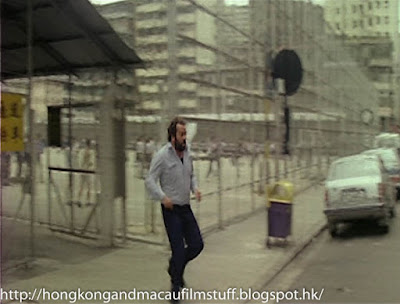 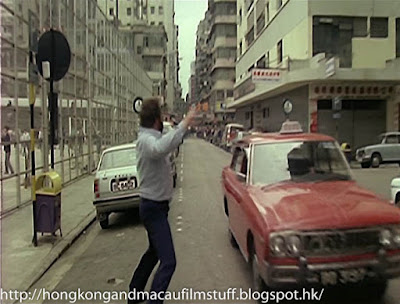 Here are the modern day views from Streetview. 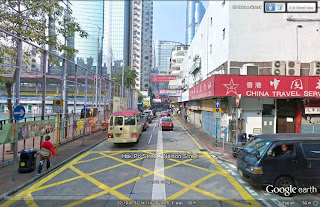 With Nancy's demise and a little boy in their care, the guys head back to their hotel, which appears to be the old Hyatt Regency (formerly The President Hotel) on the corner of Peking and Nathan.

This is the famous hotel that had a vehicular ramp running up the side of Lock Road. The hotel was demolished in 2006 and replaced by iSquare (aka "eye sore"). 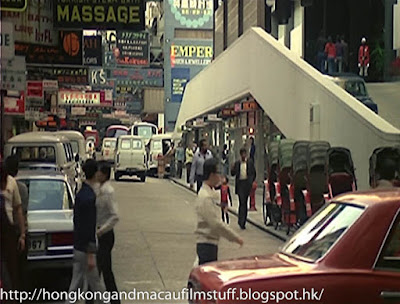 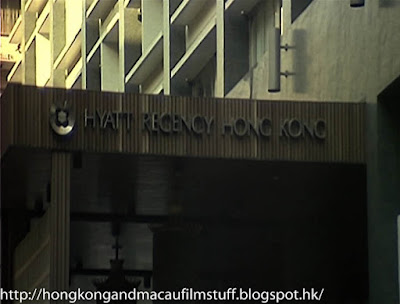 Our intrepid duo, now a team, follow a clue to a house next to a beach. Where are we now? The colourful Tin Hau Temple at the southern end of Repulse Bay beach. Here we find Nancy Sit (or as I like to call her Nancy Zit because of the large mole on her forehead). 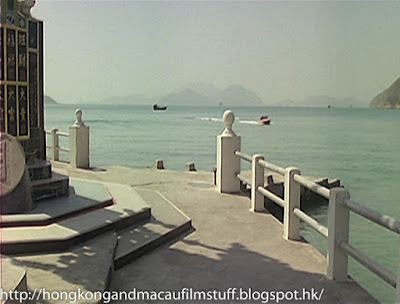 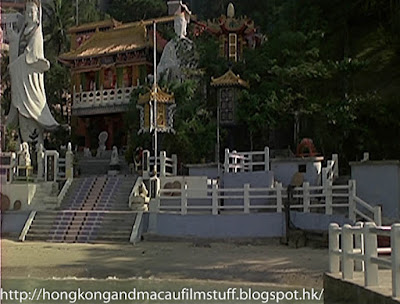 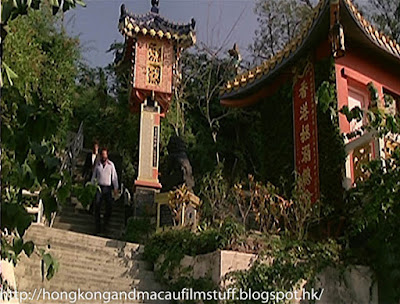 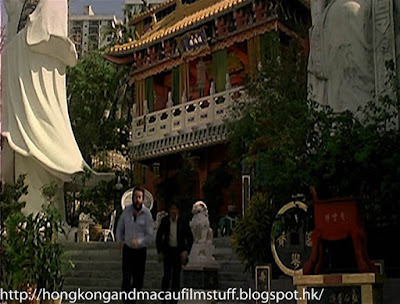 Posted by Phil at 21:21 No comments: Links to this post