Okay, I am repeating myself here a bit because I quickly covered Aberdeen Harbour for Enter the Dragon in this post - however, that post was merely to point out the fact that the film makers inadvertently captured the burnt out wreck of Jumbo Floating Restaurant Mark 1 (mark 2 - the current version - actually opened in 1976).

Of course the Aberdeen scene in Enter is quite crucial because it's where all the fighters board the junk bound for Han's Island. There are two shots in particular I would like to show you, the first taken when Bruce is sitting at the front of the sampan getting rowed to the junk. You need to look at the hillside on the right hand side to see what is the Old Aberdeen Police Station. 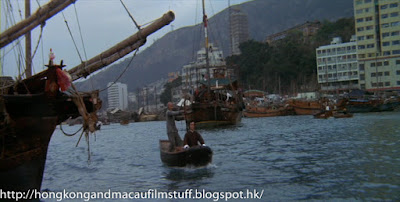 Believe it or not this building still exists and after several incarnations and usages it now seems to be some sort of youth centre called "The Warehouse". I wrote an article for Time Out Hong Kong a few months ago and needed a comparison shot, so out of the kindness of his own heart Thomas Ngan provided me with one. As you should be able to see the amount of development in Aberdeen has been considerable - not surprising considering the Govt had to rehouse several thousand boat-dwellers over the past couple of decades. Anyway, trust me when I tell you the Old Police Station is still there, just hidden behind those block you can see on the opposite side of the harbour (in fact behind the brown highrise that i sitting above the two side-by-side boats on the water). 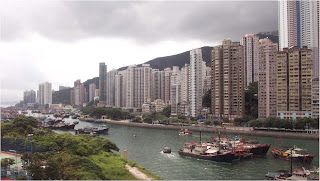 The next shot was taken - I believe - from one of the tall buildings that line the Aberdeen Praya Road i.e. the road in front of the aforementioned Police Station. It shows a great view of the whole harbour from 1973 in which we can see several points of interest. 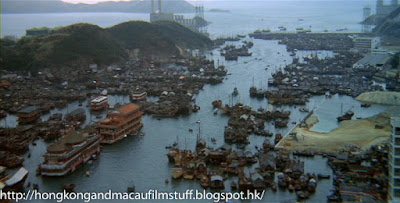 The first is the power station in the background on Ap Lei Chau. This was HK Electrics power station, it was diesel-powered (see Thomas's comment below) and sat on the spot for quite some time before the powers-that-be decided to shift it over to Lamma Island and ruin the natural scenery over there instead. The site was then used for the development of what is now called South Horizons. Yes, if you live in South Horizons you are sitting on the site of an old power station. Don't worry, I'm sure they decontaminated the earth before they built it :-)
Posted by Phil at 22:06