It's a while since I found out that Robert Wise chose to shoot portions of The Sand Pebbles in HK. The production was notoriously frought with problems but the end result is actually excellent and one of my favourite all time movies.

Long before I had started this blog I had a go at pinning down some of the shots from this classic and managed to identify the approximate location of a key scene involving a barricade of junks strung across what was supposed to be the YangSze River but was, in actuality, a stretch of water near to the West Dam of High Island Reservoir in Sai Kung.

Here are some screen grabs. In the top image you can see the camera come around the tip of Tai tau Chau with the far distant pointy peak of Biu Tsim Kok centre screen. That distant hillock is the one that still sits at the north end of the east dam and at the time of filming was the lowest part of the mainland next to High Island.

Tai Tau Chau in the foreground

The remainder of the shots show us quite clearly where the barrier was constructed relative to the western tip of High Island. Unfortunately for us, this just happens to be the same spot that underwent extensive construction when the west dam was constructed for the reservoir. Luckily, it seems as though the main dam wall was constructed behind this area, but the current watersports lake and lower dam wall do cover this area. In fact it looks likely that the small island at the far end of the barrier in the lower picture might be (or at least coincide with) the small island that sits within the water sports centre and has a small pavilion on top.

I was in the vicinity recently and managed to take a few pictures. Unfortunately, better matches for the angles were not available but if you have a keen eye you should be able to see some familiar ridges on the hills surrounding the area. The first one is the view from the sea with Tai Tau Chau in the foreground. Look carefully and you can see the tiny point of the Biu Tsim Kok headland poking up behind the top of the dam wall. 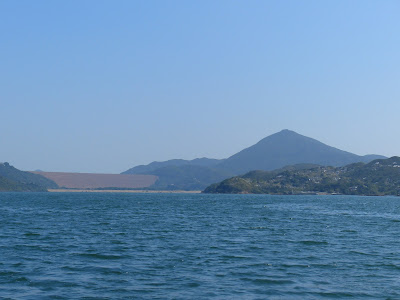 This next photo shows the Tai She Teng. You can compare it with the screen grab to see that the junks were positioned in front of where the west dam wall was built. 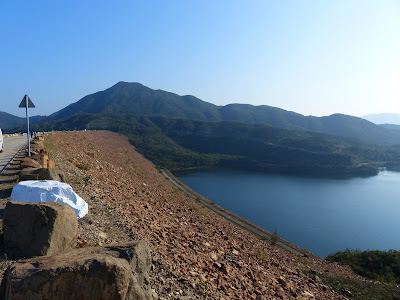 And finally a picture of the watersports lake that sits between the main dam and the lower cofferdam wall. I could be wrong but to build an artificial island in there doesn't make sense to me so I wonder if it was built on the original small islet we can see in the screen grab, or at least remnants of it? It looks like it is in the right place. Either way, judging from the nearby ridges the junk barrier on the film was constructed near to that far edge of the lake. 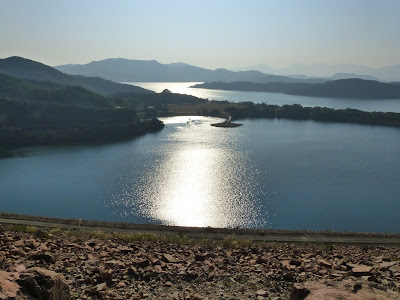